Our first night in the Pinks Automotive shop campground was a great one.  There was no wind and the temperature was constant all night. lol  Perfect place to spend the winter.  Its much like being outside in that they dim the lights for night time and about 7 am the first mechanic shows up and switches them back on and in the motorhome it looks like the sun came up!!! 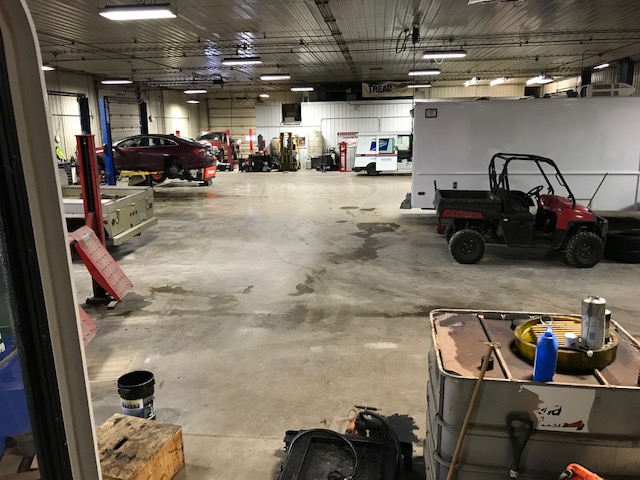 Roger got busy finishing up the removal of the injector pump.  Being in a motorhome means stuff is crammed in the most awkward places.  He had to use his video camera in a couple spots just to be able to see what he was working on. 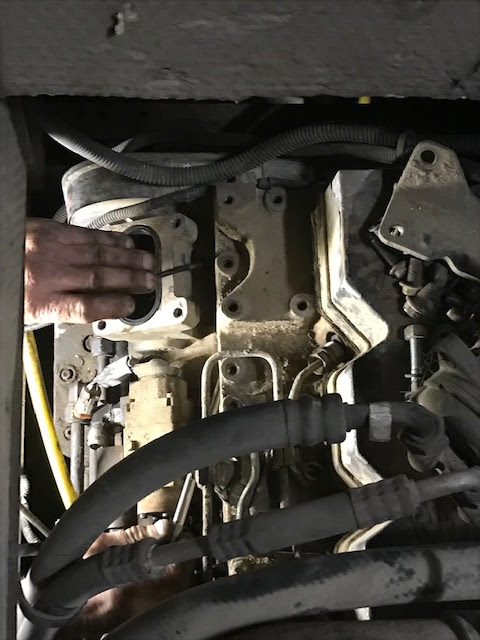 He got it out and they cleaned it up a bit and loaded in the back of our jeep and Sue and I headed off to BK Diesel in Dubuque to get checked out. 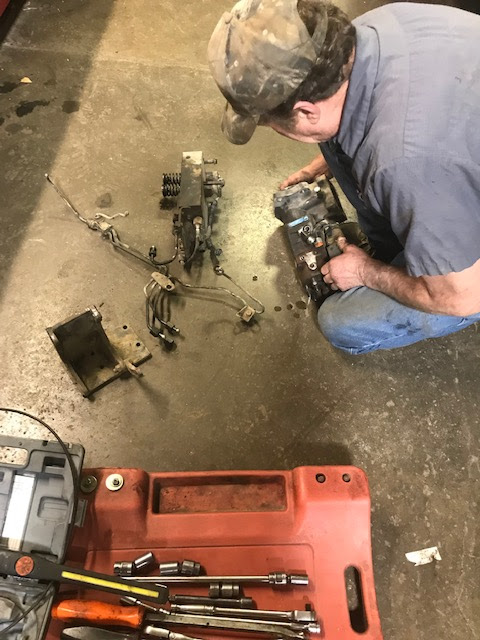 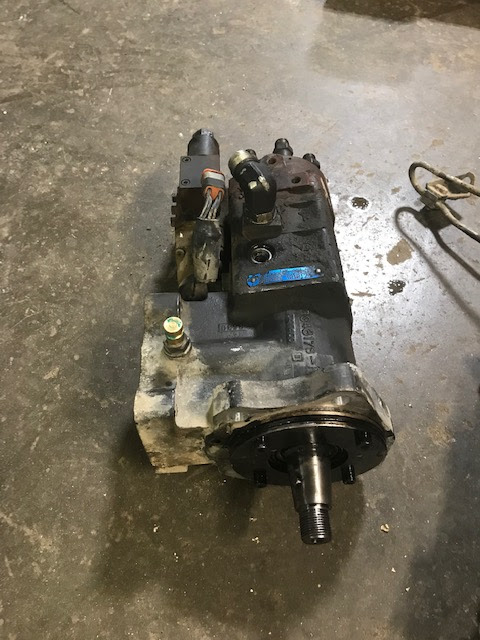 Dubuque is just to the south west of Lancaster and is on the banks of the Mississippi River.  Because it is a river town, the streets run all different directions and it makes it hard for a newcomer to get around.  Although our GPS got us to BK Diesel, I'm sure it took us on the long way around.  Mike at BK was very courteous and assured us that they would do what they could to get us back on the road. 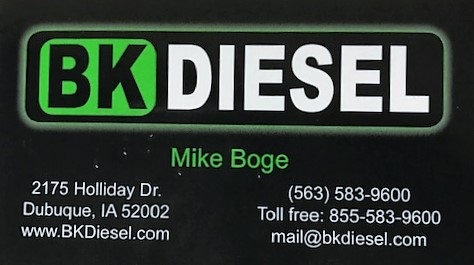 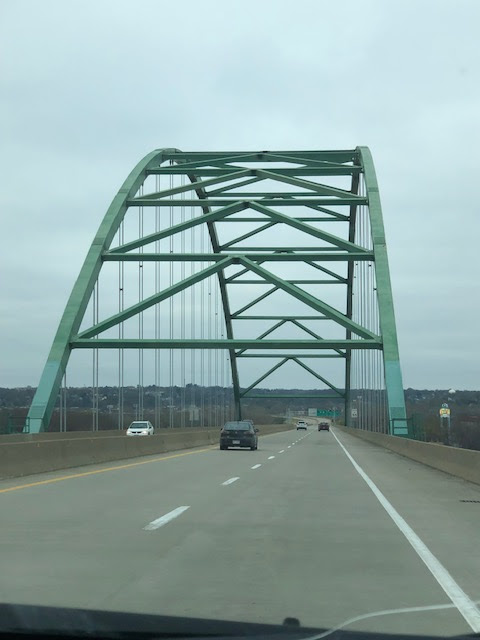 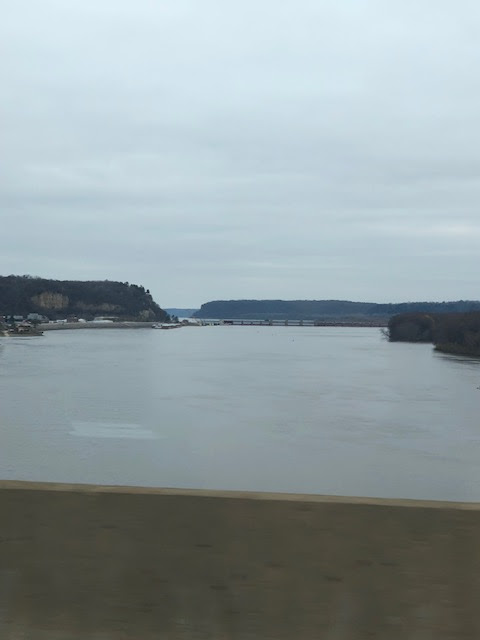 There are lots of nice buildings in Dubuque, and this one must be something important. 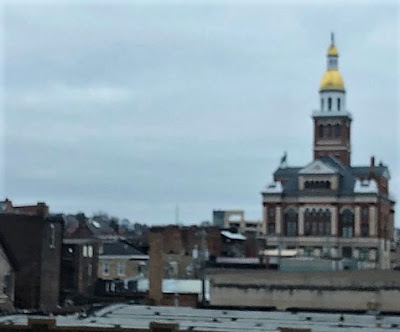 While in Dubuque we had to do a little shopping as well of course.  The critical things on the list were dog food and some groceries.  I guess that's why we went to Best Buy and JC Penny. Ha Ha 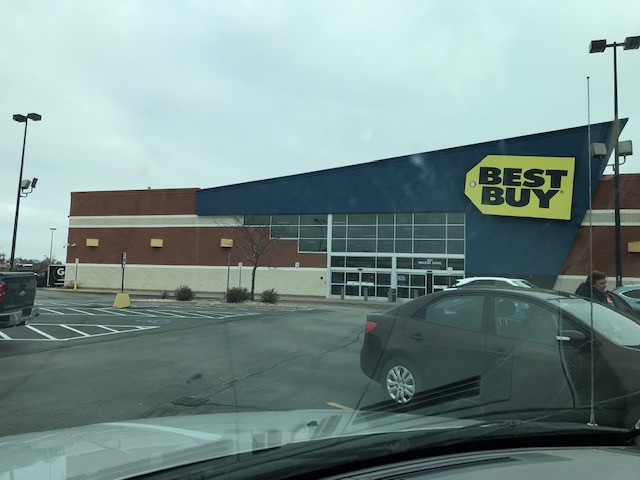 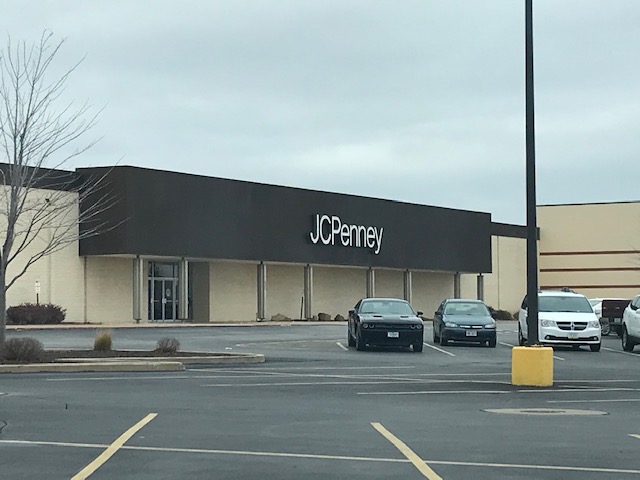 There was a detour to take on the way home which took us out in the country.  The rolling hills and farms are so pretty around here.  We saw a farmer out harvesting corn. 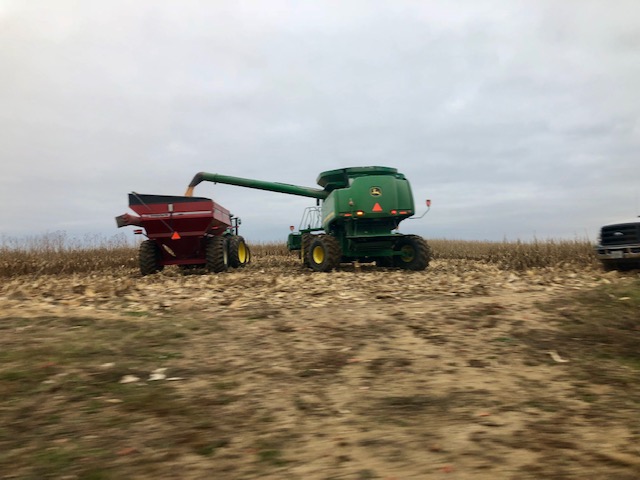 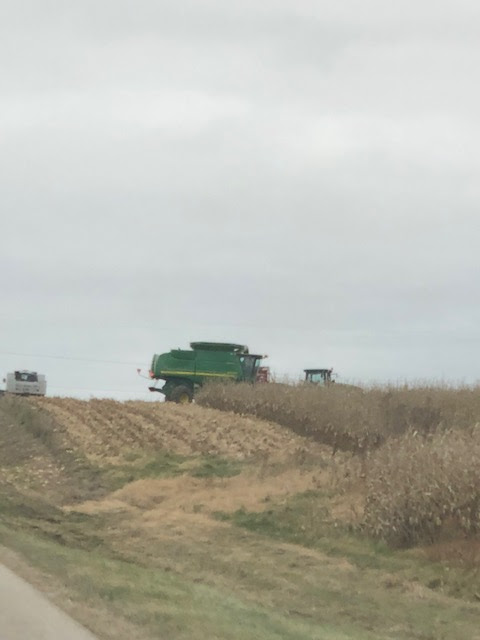 When we got back to Pinks, it was time for Happy Hour.  They operate a lot like we do in the desert because when 5 o'clock comes around, it is time for a cool one.  The guys all discuss things that happened and make some plans for the next day so it is kinda work related as well.  Anyway the owner of Pinks, AJ,  puts it out there that he is offering to buy us supper in the little town of Ellenboro where he lives.  Of course he wouldn't take no for an answer, so I grabbed Sue and away we went.  The little town of Ellenboro according to AJ has about 22 people living there but as most small towns do, it had a quaint little bar and grill downtown and you know it is gonna be fun when it is called a Saloon!Ellenboro Saloon 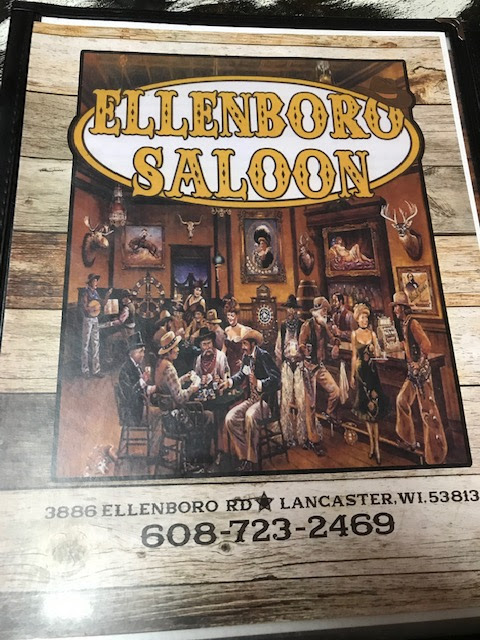 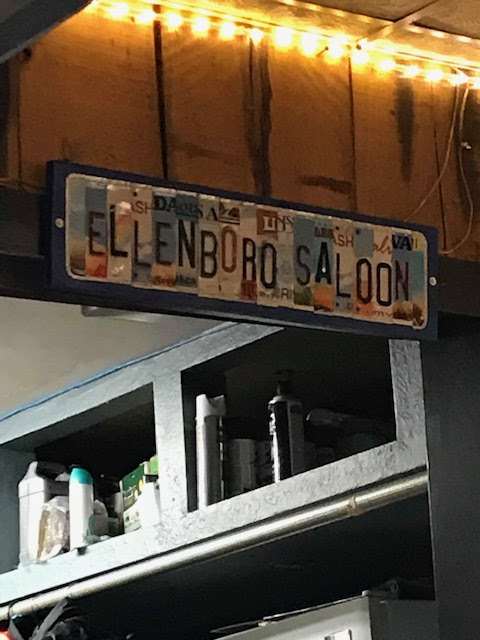 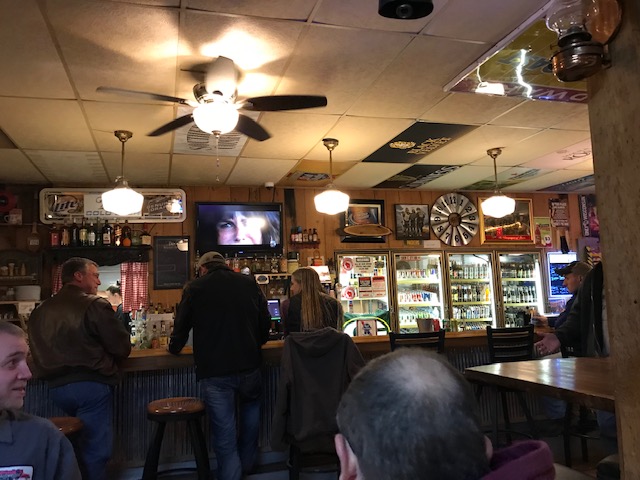 Mounted on the wall as you came in was a neat deer.  It was partly albino and they call it a "piebald deer".   This one was a real trophy deer.  Notice the white nose and legs. 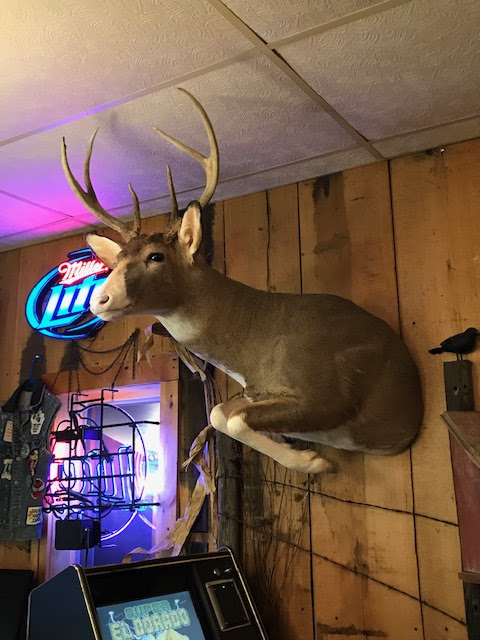 I googled piebald deer and here is what I came up with. 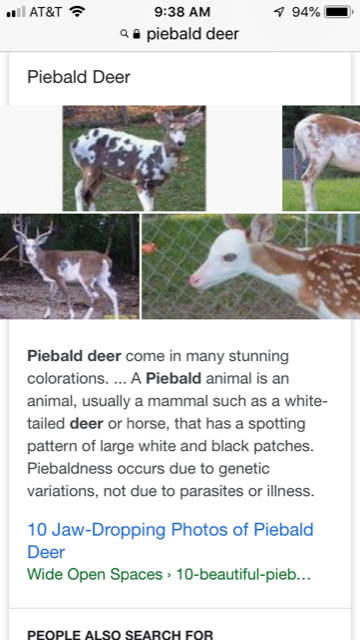 Thanks to AJ for taking us out for supper. We had a really good meal and I got our waitress to take a picture for us.  AJ's girlfriend Jocelyn joined us after supper and I apologize for not taking a picture of her.  She was the life of the party.


Our waitress's name is Mandy and she must have a good sense of humour because when she gave me back the camera after taking our supper picture, she had taken a selfie as well, so I HAVE to post it.  Thanks for your friendly service tonight. 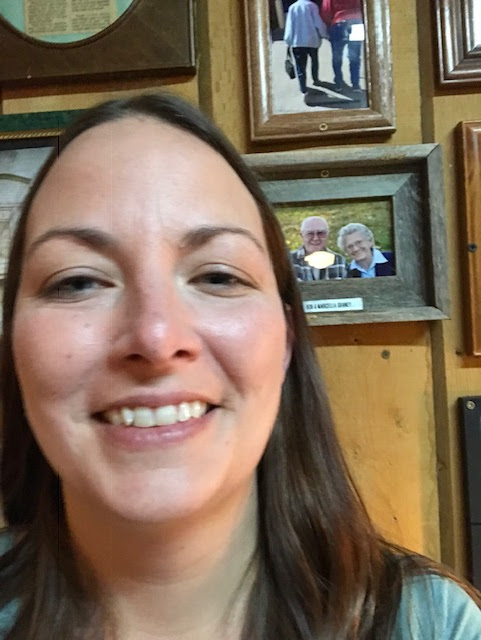 Mandy was a good salesperson as well because it didn't take her long to convince us that the Bread Pudding with some sort of rum sauce was what we needed.  Mmmmmmm

One last story before we headed home to bed.  I went into the Men's bathroom and saw something interesting.  Above the urinal was a button and if you look closely, written on it is the word push!!! Now the question is, if it were you, would you push the button??   I immediately thought it was a set up.  I didn't have the nerve to do it so I guess I will never know what would happen. 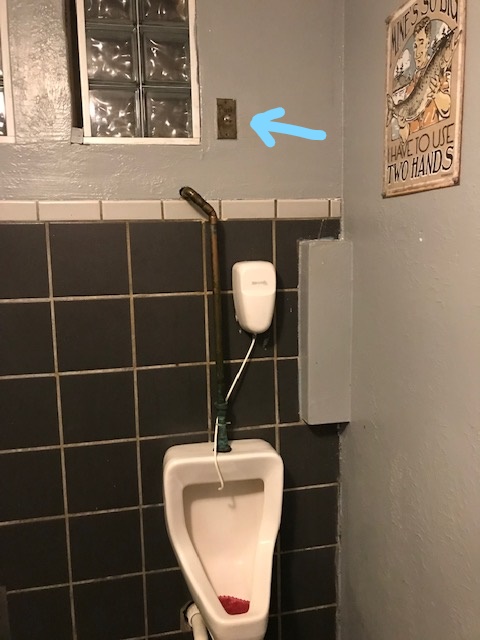 We headed back to Pinks shop to spend the night after another awesome evening with some new found friends.  We are in total amazement at the people that are out there who we would never have met if we hadn't decided to take on our gypsy lifestyle.  We are so lucky!!

Here is the view from our window tonight. 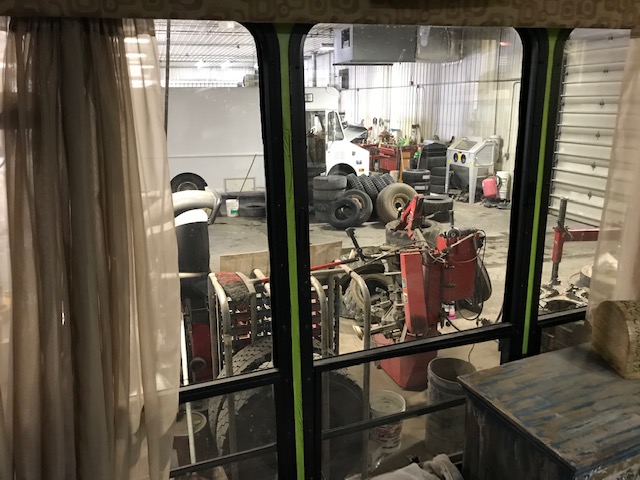 Posted by Lorne Green (A Place Called Away) at 09:23:00
Email ThisBlogThis!Share to TwitterShare to FacebookShare to Pinterest