Roger was at the shop by 8 this morning and hard at work putting the pump back in for the third and final time.  We were confident this time it would work fine and it did.  He bled the pump and we fired it up and there were no leaks. 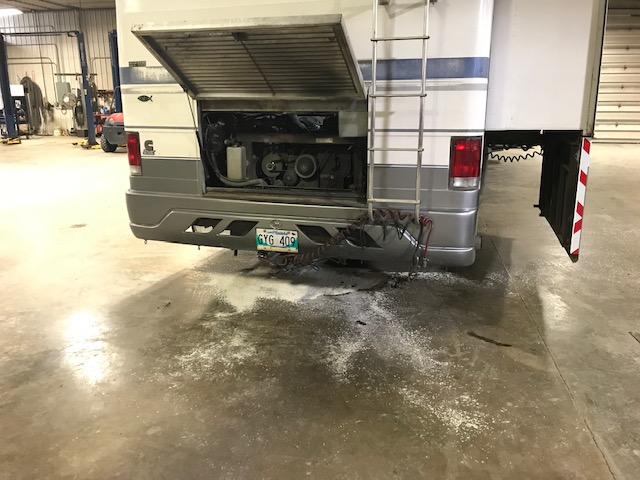 It was ironic that our first appointment with Pinks was at 10:30 am last Tuesday and at 10:30 am today we finished our test drive after completing the fix.  Exactly 1 week to the minute.  We have had an interesting week and have met some wonderful people.  We got the Jeep all hooked up and went in to say goodbye and to pay the bill. 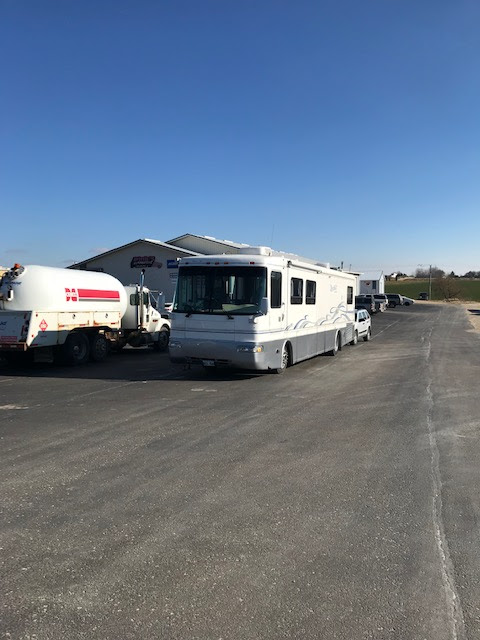 Well a week ago I said to Sue that I hope this is not an expensive fix.  That was not to be, but AJ at Pinks did everything in his power to keep his part of the cost to the bare minimum.  After looking at the bill I am certain he cut out a lot of chargeable items.  His labour for 7 days in the shop was only $1200.00.  I'm not sure what his labour rate is but at $80.00 per hour that is only 15 hours labour.  I know for a fact that he was that much just diagnosing the problem.  The only part that was a bit disheartening was that the diesel rebuild shop charged us full bore for a rebuilt pump, when I think all they really had to do was clean it and pressure test it.  $3100 was their bill and AJ never up charged that one cent.  So the total bill was $5200.00 in American funds which equates to about $6900.00 CND.  That is a tough pill to swallow, but when we went with a diesel pusher we knew that repairs were expensive.  Hopefully we can get through the rest of our winter travels with minimal expenses.  Then in the spring we will have to work hard to make that back.  Thanks AJ for keeping the cost to the minimum.  And before we left he gave us a care package with cheese and horseradish and a whole bunch of Wisconsin treats in it.  And Matt gave us a bunch of venison treats as well.  And thanks for all the suppers and tours while we were there, and a big thanks to Roger for sticking with us for the last 7 days.  You have more patience than I would of had.

We had another problem yesterday when we made our trip to Dubuque.  The jeep started really making a lot of hammering noise in the back axle.  I stopped a couple times and kicked tires to make sure they were not falling off.  I figured, Oh no, a U-joint.  When we got back to the shop Steve put it up on the hoist and we checked the drive train.  Checked out ok.  I just happened to wiggle the drivers rear tire and heard a clink.  Checked the wheel nuts on it and I could turn them with my fingers.  We checked and they had not worn the rim yet so we were lucky.  I had just got new tires on the Jeep before we left Manitoba and I guess the shop where I bought them back home had not torqued that one wheel.  All the other ones were tight.  We were lucky it didn't fall off when we were towing it behind the MH.  Now I should take a little blame, because I know you should retorque wheels after 100 km's to make sure this doesn't happen.  However this is the third time we have had loose wheel nuts from this same shop so I feel it is unacceptable and will not be taking anything there next summer.

We were happy to be back on the road and headed down a nice back road before hitting the interstate. 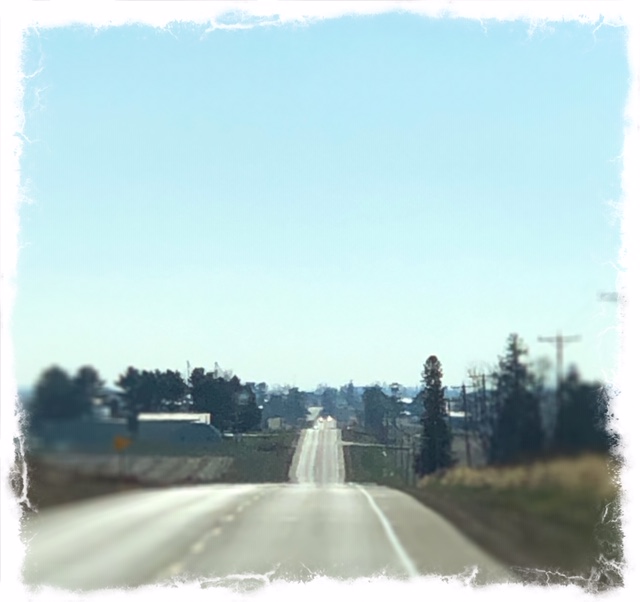 Then on to a four lane highway. 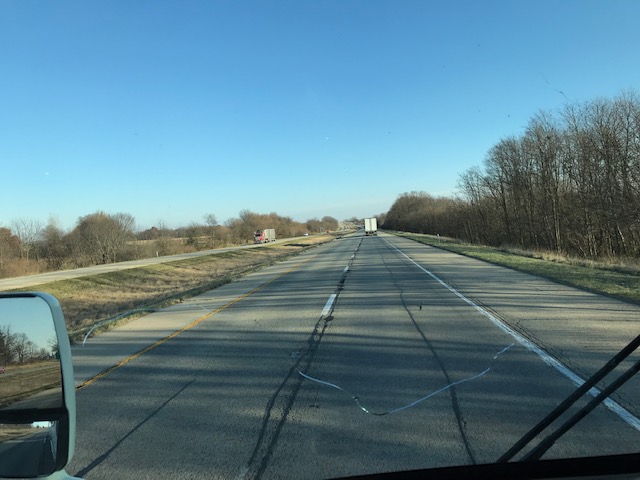 Then on to the interstate.  We are going to keep driving until we get to the Gulf of Mexico near Biloxi Mississippi. We drove till just after sunset today. 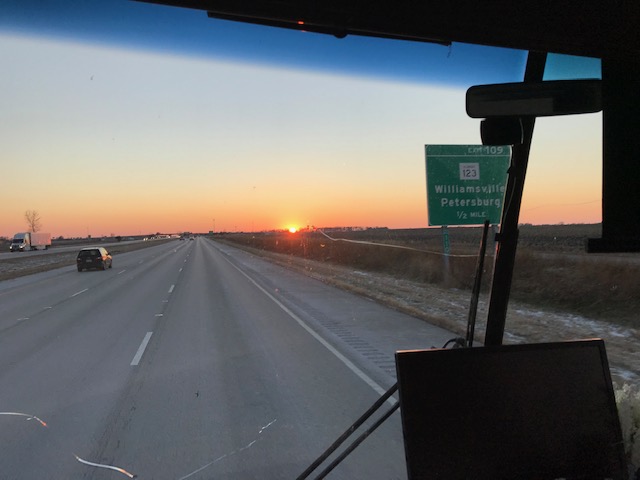 We crossed the Mississippi a couple times today. 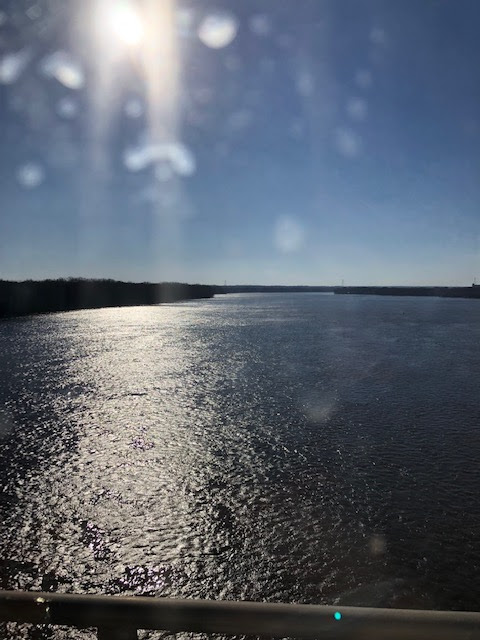 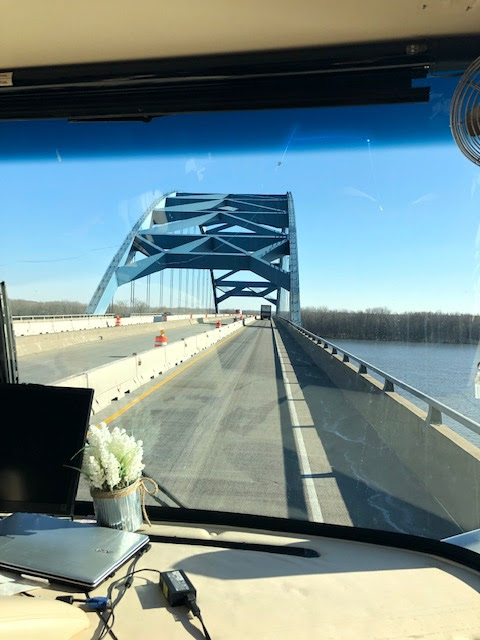 Our trip today was uneventful.  We gave up on Highway 67 and headed for the interstate because it was rough and narrow.  Would be a nice drive if we were not running south from the cold. We called it quits tonight in Springfield Illinois at a Walmart, however our view out this window is of a Lowes which is next door.  It is supposed to go down to -10C tonight so we will have to keep the heat on. 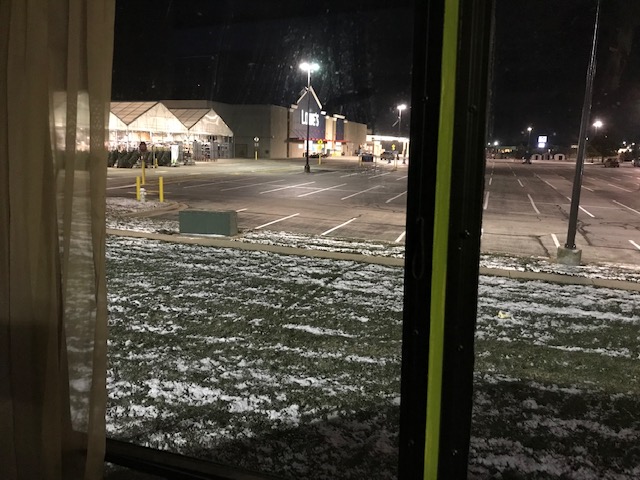