We were up early this morning so we could be back in the Pinks Automotive shop by 8 am.  Our mechanic, Roger was there to meet us and let us in.  We backed in today so the motor was handy to his bench.  We had some difficulty getting it to fire up this morning.  It would start and then shut down.  It did this a bunch of times before we got it to run.  The same lights were still on the dash. 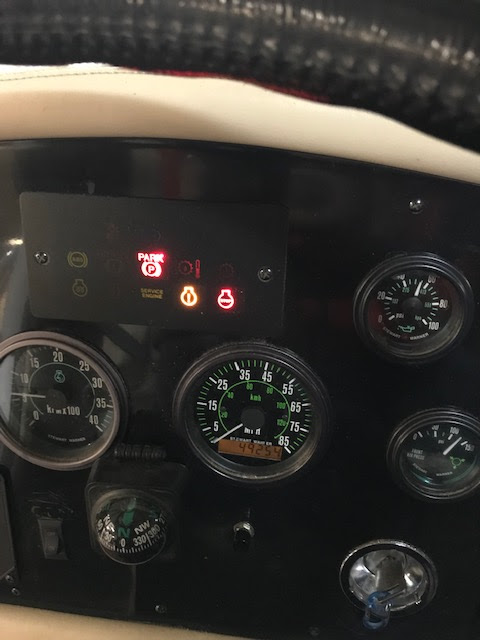 Roger went right to work checking diodes, solenoids, actuators and pumps.  It doesn't matter how hard you try, when working with diesel you get dirty. 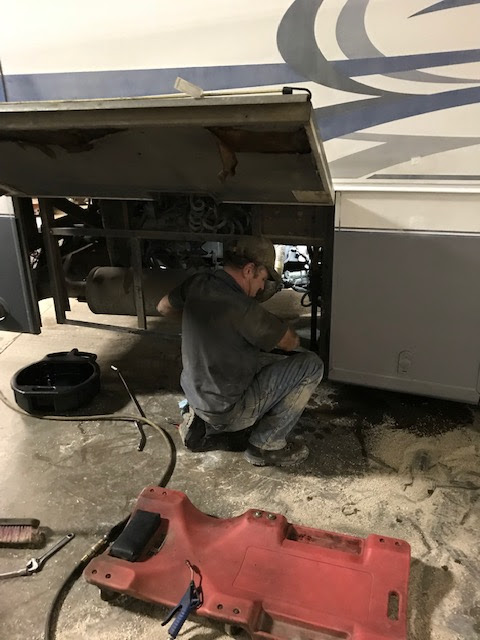 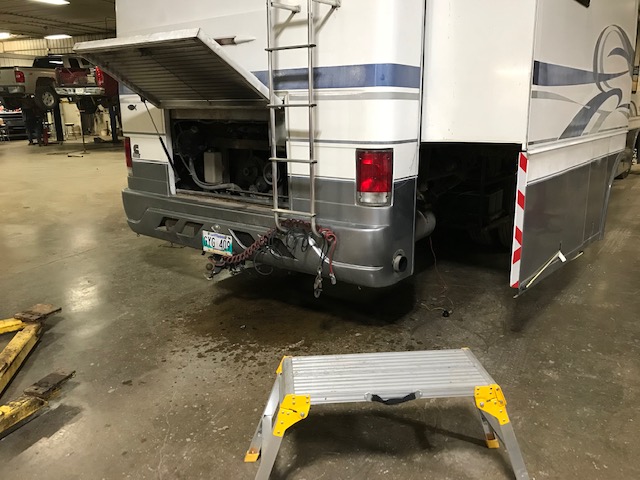 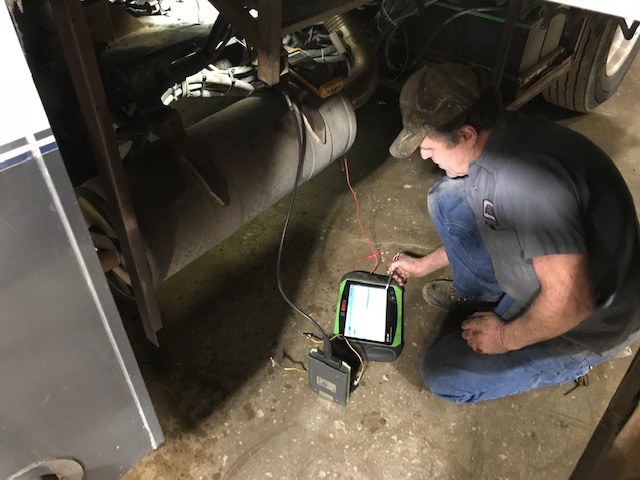 We took the air filter out and blew it out to make sure there was nothing restricting the air flow.  If you know anything about diesel engines you will know that black smoke generally means too much fuel or not enough air.  There was some dust but nothing to create the problem we have. 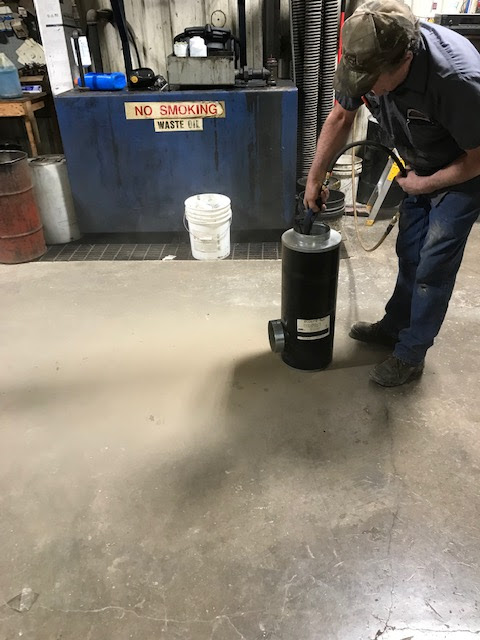 About noon we finally got down to the last code which says we have an injector pump problem.  He had suspected that from the start I think, but because the pumps are expensive, he wanted to rule out all the simple stuff.   The filters and hoses had to be changed no matter what.  So now the hunt for a reasonably priced injector pump begins. 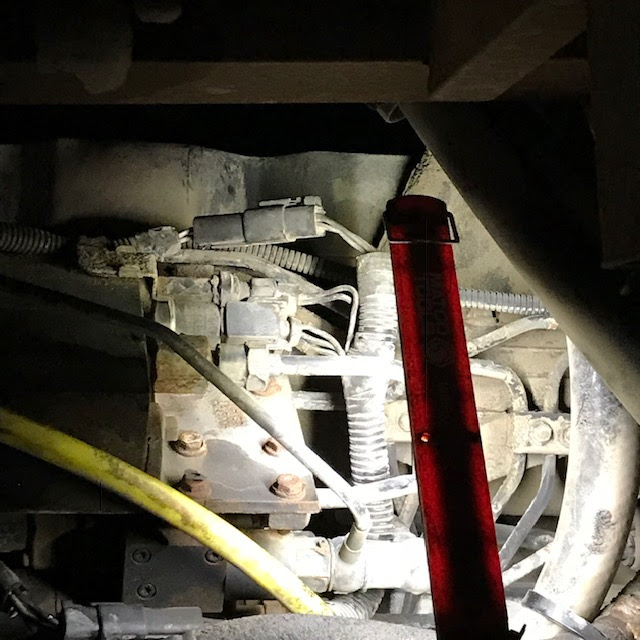 While all of this is taking place, Pat and Harold are patiently waiting outside in the parking lot.  It is cold and windy out there so we hope they are keeping warm.  True friends!! 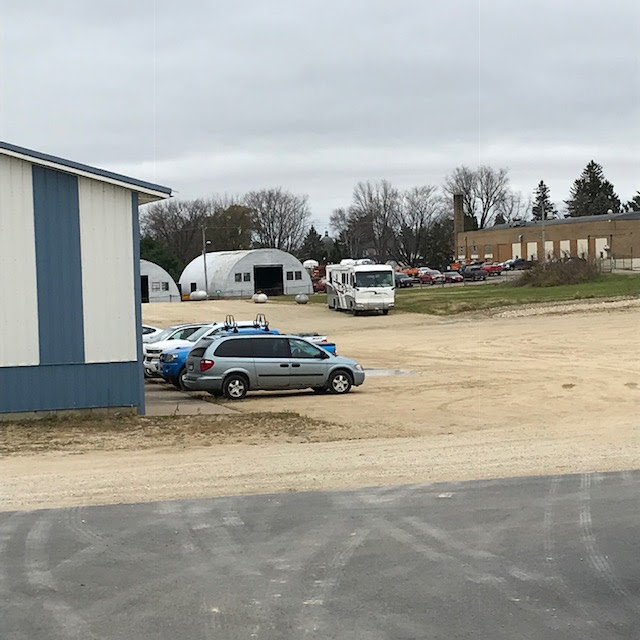 So after about an hour of searching for pumps, the owner of Pinks and Roger and I had a pow wow.  This was after they broke the news to me that a re-manufactured pump will cost around $3500.00!!!   We also talked about getting a used one at a wrecker for about $1000.00 but there is no guarantee it will even work.  Could have a million miles on it.  My thought was that this pump only has 60,000 miles on it and should be in fairly good mechanical condition.  There is a rebuild shop down the road that will take it apart and clean it and test it.  If, and I say If, it needs new parts they will install as needed.  Bottom line is that the most it will cost for them to do a complete remanufacture would be the $3500.00.  But the gamble is that it is just dirty and maybe under a $1000.00 will fix it.  So we cut the filter open to see what it looks like and it is black and slimy.  This could be from the old fuel lines breaking down on the inside.  Some of the gunk has obviously got through the filters so it is probably lodged in the pump.  Fingers crossed that is all it is.  If that's what it is....cheap fix.  Well not cheap but cheap compared to rebuilt. 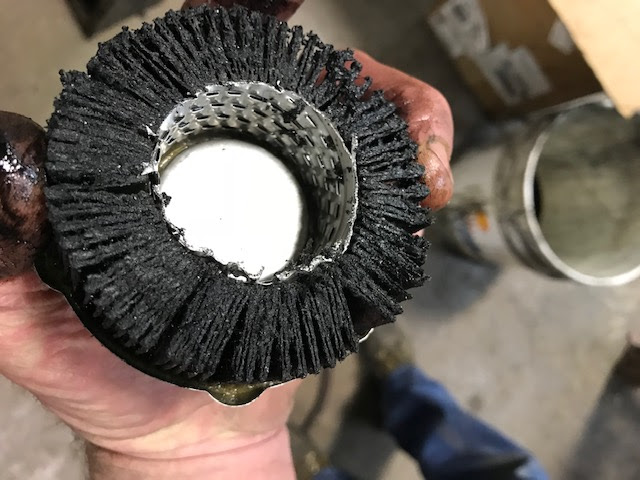 The plan to get the pump taken apart and cleaned was a no brainer so they are starting to take it off the MH and Sue and I will transport it to Dubuque in the Jeep.  That will save a lot of time.  Dubuque is about 40 minutes from here. 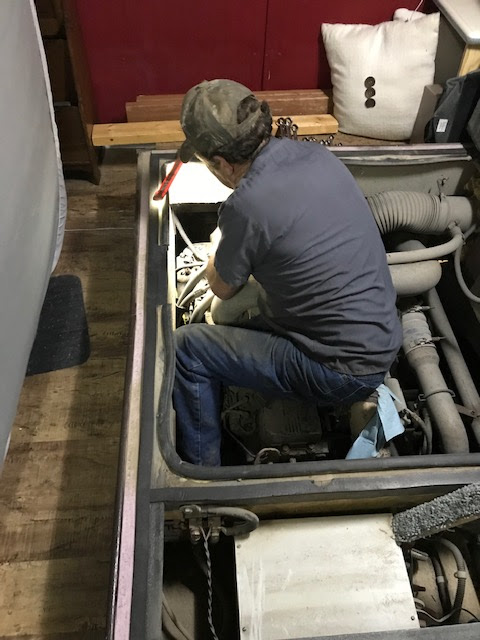 So here is where the story gets really interesting.  Now we don't know the owner of Pinks from Adam and he hasn't had much to do with us since we got here.  So while we are discussing the plan to remove the pump, I realize that this will immobilize the Ponderosa.  So I ask him nicely if he can take the pump off in such a way that we can roll the Ponderosa outside so we can live in it for the next 2 days while the pump gets fixed.  Now you can believe this or not but it is the honest truth ---  He says he will just move us over in to the bay along the wall and we can live in it right in his shop!!!  I almost fell on the floor.  He proceeds to get the bay ready for us and helps us move the Ponderosa.  I'm still in shock and we are sooooooo thankful for people like him who know how to be neighbourly.  He did say the shop is full of security cameras and he has guns in his office so he is not worried!!! LOL.  When we get all done we will be sure to do a big ole Pinks promotion on our site. I hope it will help him by bringing him a few customers.  We have had nothing but the ROYAL treatment here. So if you need anything truck or automotive bring it to AJ at Pinks Automotive in Lancaster WI. 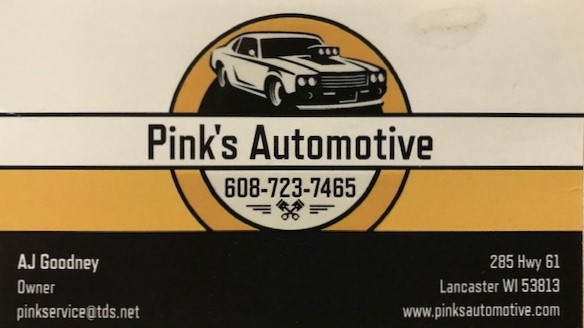 So 5 o'clock rolls around and everyone in the shop is done for the day.  The owner AJ catches me and say that the guys usually hang around for a quick one and some BS so he invites me.  He hands me a beer and I stayed and chatted for quite a while with him and Steve and Roger and Matt.  The guys were interested in our lifestyle and how we operate.  After a bit Matt asks me if I want to come with him to see his parents dairy operation.  I couldn't resist so off we went.  I should add that Sue has not been feeling good today so she stuck close to home tonight.

The dairy operation is kind of a family size farm.  They milk between 60 and 80 cows at any given time and take a lot of pride in what they do.  It demands a lot of them because they have to be there 7 days a week and the milking HAS to be done twice a day like clock work.  When we arrived they were about half done the milking so I got to see the whole operation. First stop was the milking parlour.  There is about a 3 foot deep pit to stand in to make the work easier.  The cows are well trained and when they open the gate for more, the cows actually side step into place.  It is rather like a dance to watch them.  They do it so often that they are very well trained.  The pit is very clean and constantly washed down. 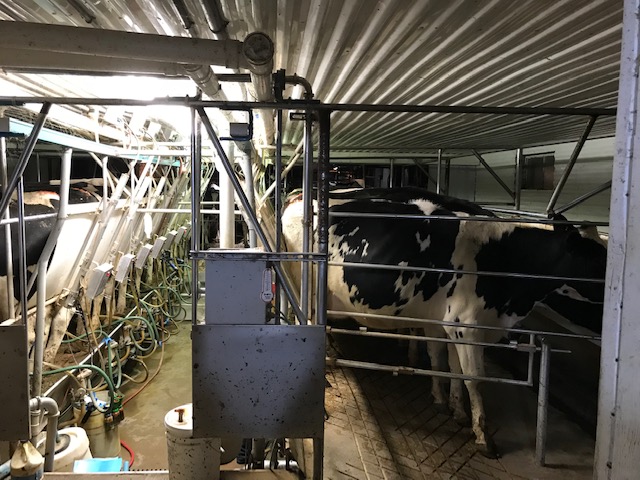 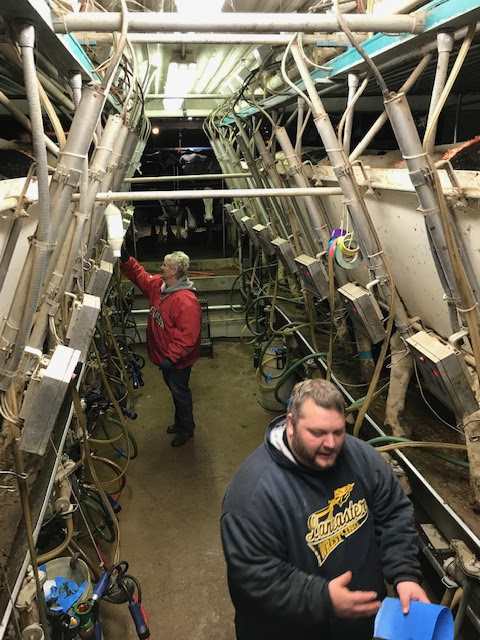 They were showing me the milk amounts on the computer read out and it said that particular cow gave 47 pounds of milk.  That equals over 5 gallons.  I was not aware that a cow would produce that much milk.  Once they have been milked they are marched out of the parlour. 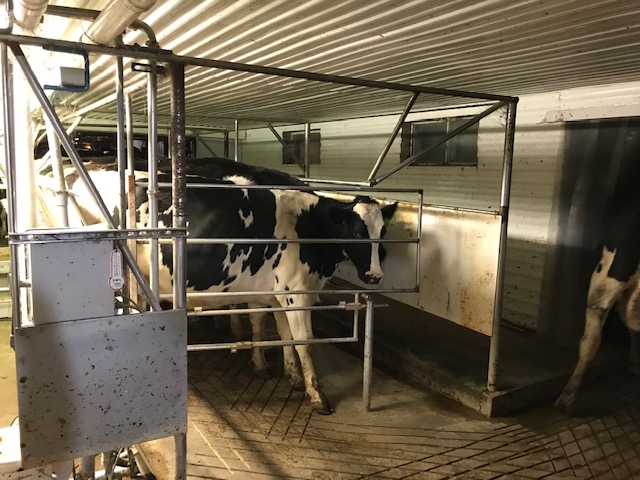 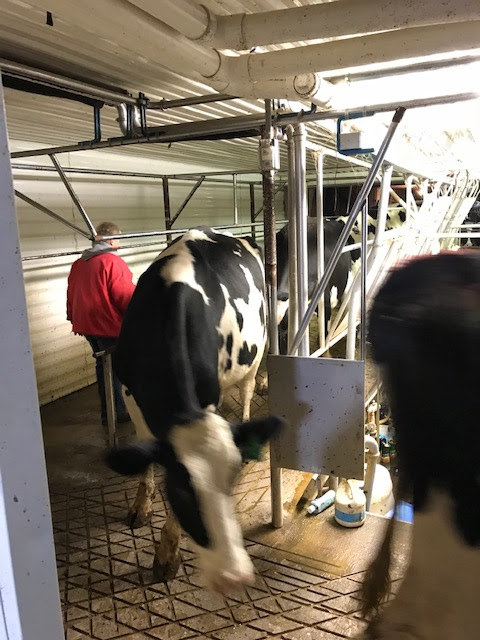 From the parlour, they head over to the barn where there is fresh feed waiting for them.  These cows get the best rations that money can buy because that is what makes good milk.  I love the smell of the silage mixture.  It is a sweet fermenting corn smell. 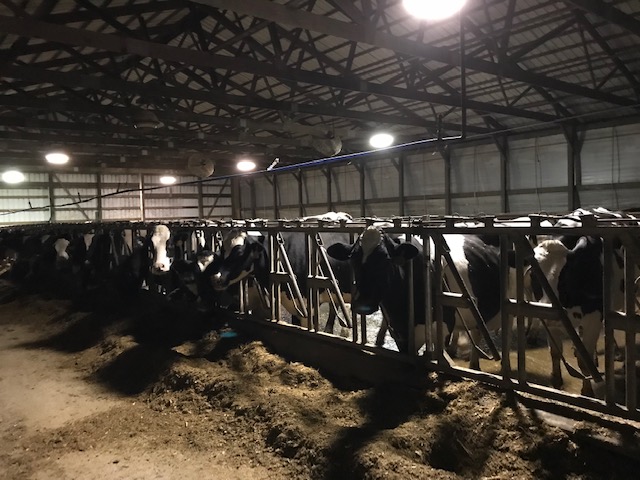 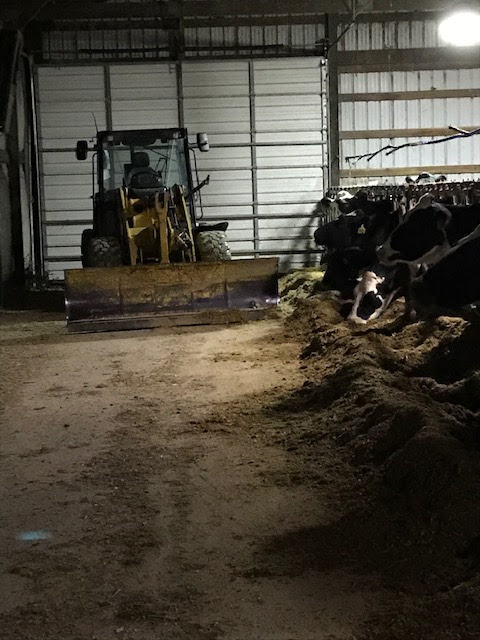 Last stop of the night was the milk storage room.  Matts brother was flushing all the milk lines to be ready for morning milking.  Matts mom came in and grabbed a plastic gallon jug and went to the milk tank and poured it full of milk.  This goes to the house for drinking and cereal etc.  If you live on a dairy farm, you drink lots of whole milk.  I am not a milk drinker, but it did look good. Here is the tank where the milk is stored.  The milk truck comes every day to empty it.  Although I didn't ask, I think it must be a 1000 gallon storage. 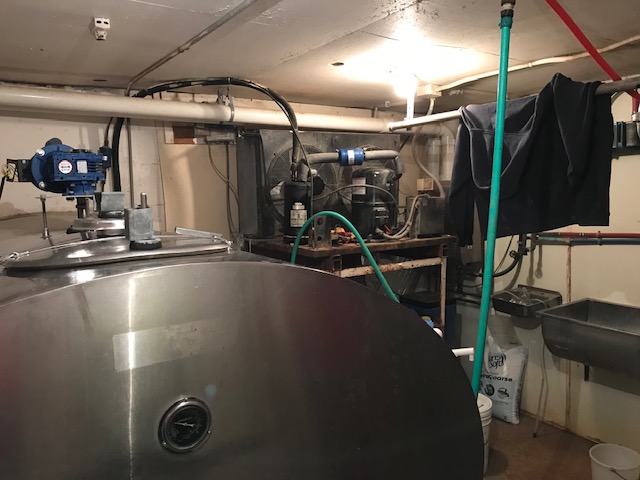 It was so nice of Matt to take me to see this operation.  I can tell that although he works and lives in town, the farm is a huge part of his life.  His three kids seem to enjoy it as well.  Thanks Matt, his dad Stuart, and his mom and brother for the tour.  I really enjoyed it.

Matt dropped me back off at Pinks Automotive shop where we are going to spend the night. We can only wonder what will happen tomorrow.

Here was our view out the window for a couple days: 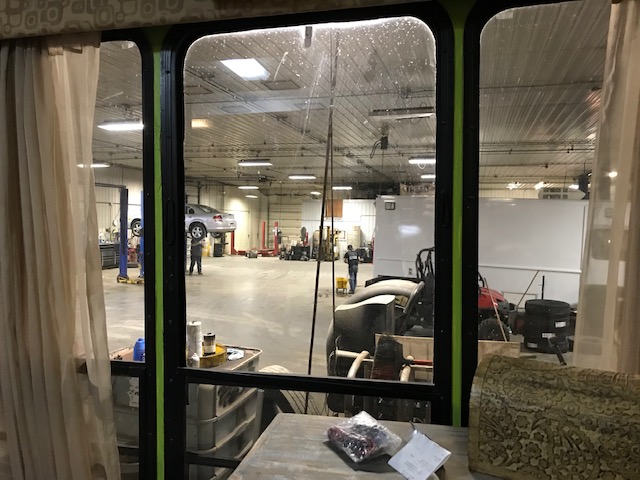 Posted by Lorne Green (A Place Called Away) at 06:11:00
Email ThisBlogThis!Share to TwitterShare to FacebookShare to Pinterest