Changing out Ed and Lessies Batteries.

WHERE ARE WE? Victoria City RV Park, Victoria, Texas
One of the reasons we moved to Victoria was because Ed and Lessie have ordered new batteries for the Bird!!  Apparently, the RV repair shop in Florida last winter mistakenly installed lead acid batteries instead of AGMs in their rig and they didn't discover it until a couple weeks ago.  After some negotiations, the RV repair shop came good and reimbursed them for the lead acids and told them to go buy whatever AGM they needed.  When they asked about returning the lead acids, the company said they didn't want them so they could keep them and turn them in for core credit.  When they ordered their AGM's the guy there said he didn't want the lead acids for core, so being nice people and knowing we had batteries that were on their last legs, they gave them to us.  How nice is that.  The only deal is they want me to change out their batteries for them.  So today the new batteries arrived, and the changeover began.  Ed got in there cleaning the battery cables in preparation for the new batteries. 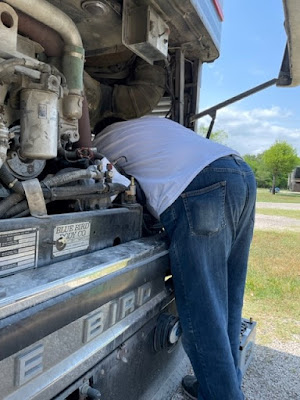 We got all the cables loosened off and then pulled them all out. 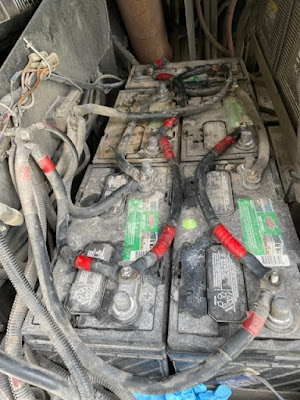 I got out the wire wheel and cleaned up the battery cable connections before reinstalling them. 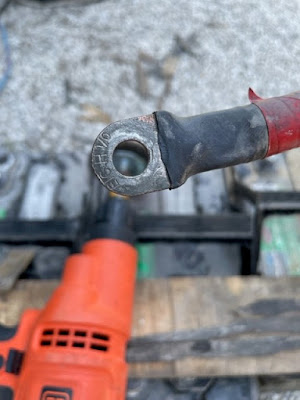 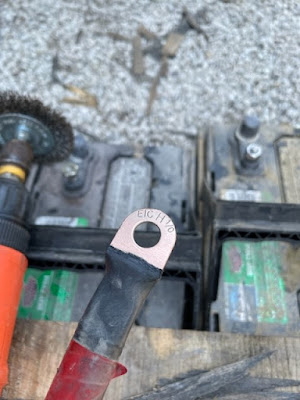 We got them all out and set them up close to our motorhome and I cleaned them all up.  Installing them  will be a tomorrow project.  We are switching from 6 - 6 volt batteries to 5 - 12 volt batteries.  We will be reducing our Amp Hrs from 675 down to 490.  We are not that concerned about it because we don't really boondock as much as we used to, and we have learned how to conserve electrical energy.  Our contract says we don't have to work past happy hour, and happy hour can start anytime we want it to. 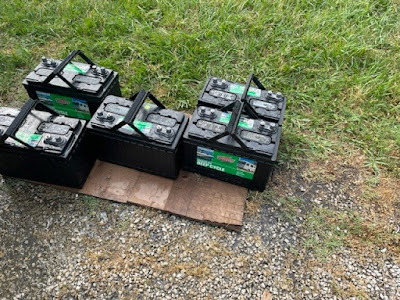 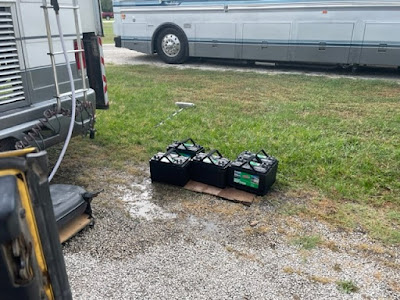 The 5 new AGM's fit just perfect in the space they have.  They only have room for 5-12 volts in the compartment they are in but 5 of them will give them 600 amp hrs of power. 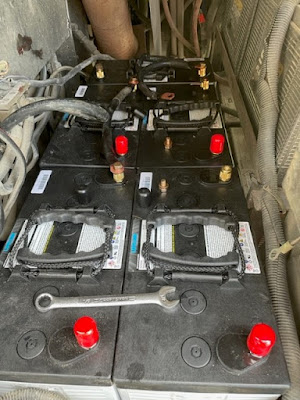 I did go downtown to look for some supplies that I will need for tomorrows project.  After that it was feet up and watch a little Survivor and off to bed.  Goodnight.
Posted by Lorne Green (A Place Called Away) at 19:28:00
Email ThisBlogThis!Share to TwitterShare to FacebookShare to Pinterest