WHERE ARE WE? La Penita, Mexico
Today is Market Day (tienga) in La Penita.  On Market day the town gets flooded with gringo's coming from all of the hotels and vacation homes in Rincon Guayabitos.  All week long we float along in our quiet little town and for one morning a week it is masked zoo.  There are lots of things to buy and there are no shortage of buyers.  After 2 pm. most of the gringo's go back into hiding and everyone else puts their masks away for another week. 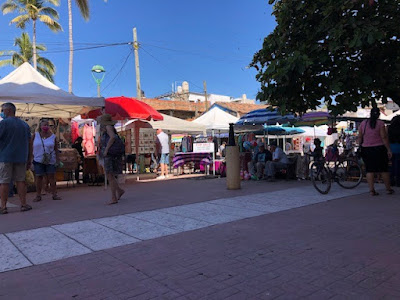 There is a beautiful church in the square where the market is and I often stop just to take in the peace and serenity of it. 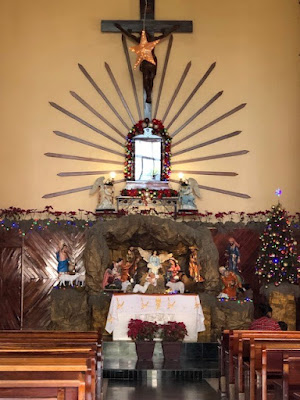 On the way home I took the beach and there was a guy there selling his paintings and doing sand sculptures on the beach.  It was amazing to see his work and he included some of the kids and let them help him. 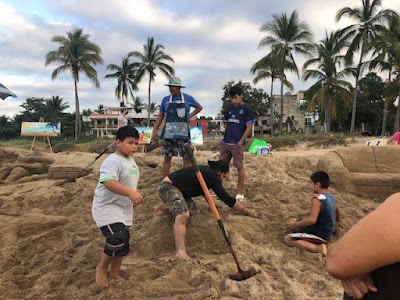 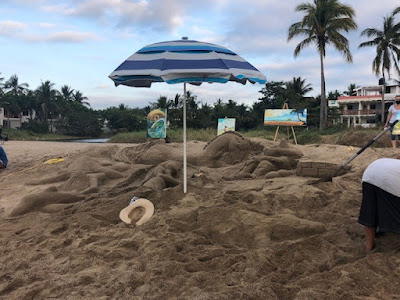 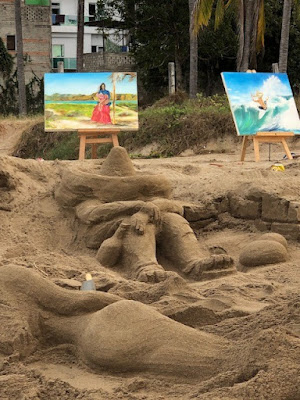 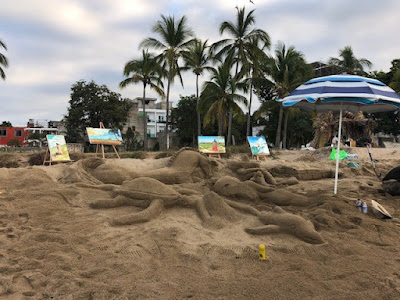 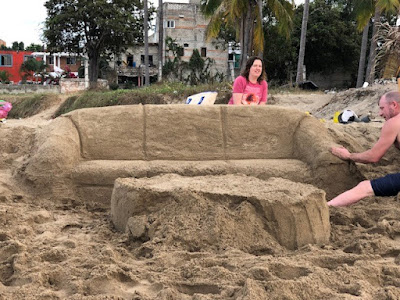 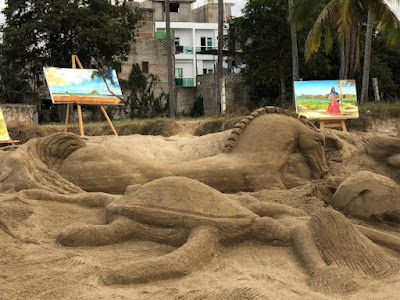 Just down the beach I ran into Sue and Archie out for a walk.  She had just been down looking at the sculptures.  Archie's walking skills are improving but he still does the "squirrel" thing and takes off on the run. 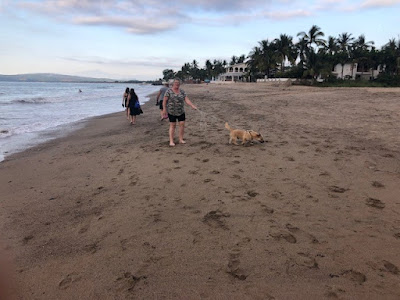 It wasn't long before it was Happy Hour again.  Not many people there tonight.  Just John and Harold an I but it was still happy!! 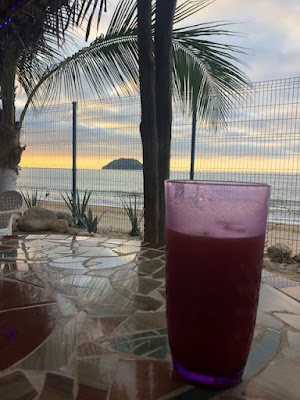 And then of course, another sunset!!! 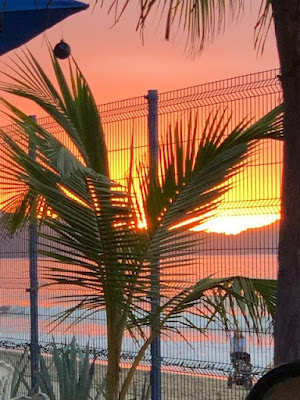 After supper we headed over to Kenia's to participate in a King's Day celebrations.  Kings day is very important to the Mexican people and I found the following explanation of the day.

In Mexico and many other Latin American countries, Santa Claus isn’t as popular as he is in the United States. Rather, it is the Three Wise Men who are the bearers of gifts and leave presents in or near the shoes of small children. The holiday is also known by the name Epiphany and dates back to the 4th century. A grand feast would be held on this day to honor the occasion of Jesus’ baptism and to pay homage to the Three Wise Men.

Many believe mysterious events preceded Jesus’ birth with perhaps the most notable being the appearance of the star in Bethlehem. This new star appeared in the evening sky just prior to the arrival of Jesus. Three wise men, or Magi as they were known, whose names were Caspar, Melchior, and Balthasar, traveled a far distance to pay homage to Christ. They brought with them fine gifts of gold, frankincense, and myrrh.

Three Kings Day, or El Dia de Reyes, remains an important holiday for Catholics. In addition to gift-giving, there is also a culinary treat that is specific to the holiday. Known as Rosca de Reyes (King’s Cake), this holiday dessert is a symbolic pastry. Shaped in a circle to signify a king’s crown, this sweet bread holds a special surprise. Inside is a small plastic figurine representing the baby Jesus. Whoever finds this token is obligated to host an upcoming party and cook tamales for the occasion Dia de la Condelaria (Candlemas Day) which occurs each year on February 2.

We all cut our pieces of bread and Kenia and Oscar found figurines in theirs so we will be coming back on February 2 for tamales with them.  We got to meet Oscar and Kenia's mom Sujey tonight.  She is beautiful like her children and has a big smile.  We hope to see more of her while we are here. 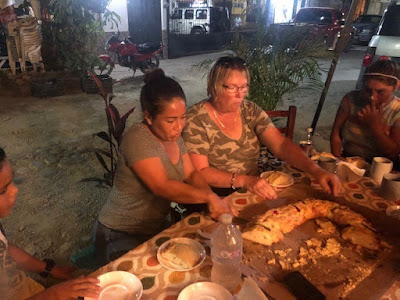 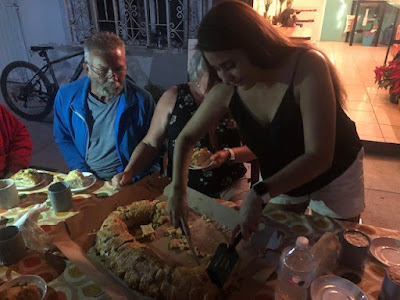 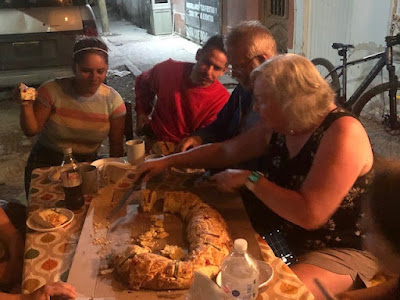 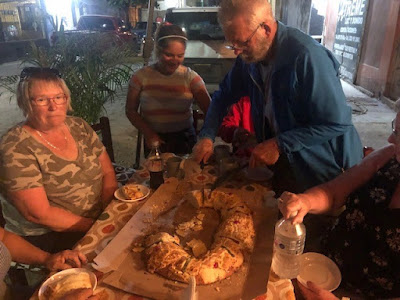 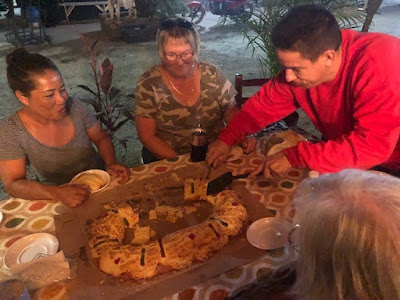 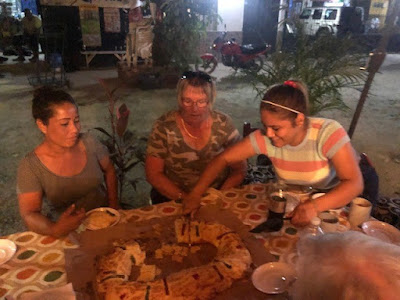 Oscar showed off his statue.  He will be making tamales along with Kenia. 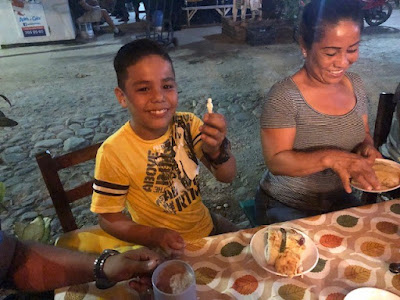 On one of the cuts we saw another of the little statues sticking out so everyone avoided that side of the bread.  lol  It was fun spending time with all of them and we are getting to the point where we can communicate with them enough to be part of the gathering. 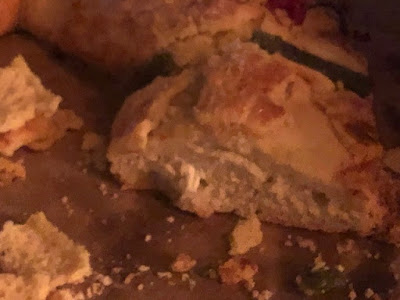 We had an awesome evening and love participating in some of the cultural events with Kenia and her family and friends.  We do not forget all of you at home where the weather is a little less than warm.  Hang in there folks, spring is only 5 months away!!   Goodnight!!. 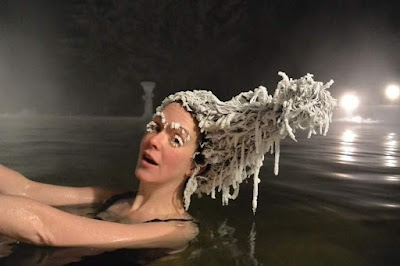 Posted by Lorne Green (A Place Called Away) at 20:30:00
Email ThisBlogThis!Share to TwitterShare to FacebookShare to Pinterest