Good News, and Not So Good News!!

WHERE ARE WE? La Penita, Mexico
Well today we are thankful that Kenia came to visit us after lunch.  She took one look at Sue and said I have a friend who is a doctor and you need to go see him.  If you remember a couple days ago Kenia had sent home her home cure for our sniffles.  Well Sue has been coughing a lot and not really getting better.  She was determined to ride it out but Kenia was persistent that she go to the doctor.  So off they went to Los Ayalas in a cab.  I was feeling down by this time and didn't want to drive them.   First thing they did was to run a Covid test.  Well it looks like that isn't the problem. 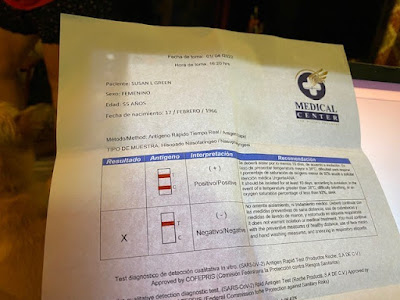 So off she went for some X-rays and bingo, we found the problem.  Apparently if you know anything about the lungs, this X-ray is not all sunshine and roses.  Double Pneumonia he said. 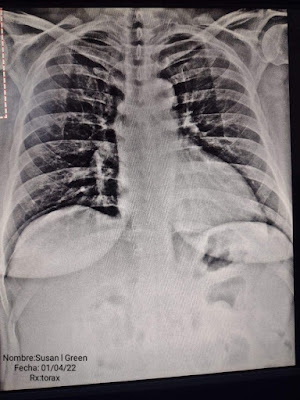 Well now he tossed out a couple options.  Two days in the hospital which was quickly turned down, or 4 shots in the backside, one a day for 4 days.  Well I guess that is what we are doing!!!  So shot number 1, the visit, the covid test, and the Dr. visit was a total of 2500 pesos.  That's like 150 bucks!!!  Then 400 pesos each for 3 more pokes so another 65 bucks.  How cheap is that!!  I sometimes wonder why we buy health insurance for Mexico with a $1000 deductible??  You would have to have something pretty major to even get over the deductible!!!  Another story for another day!!   Anyway like I said the Dr and his wife were good friends of Kenia's so he showed Sue around his house.  He has a full fledged atrium in his living area with giant parrots and stuff in it.   Sue got to hold one of the birds.  Neato.  I know she doesn't look very sick, but believe me she was hurting!!! 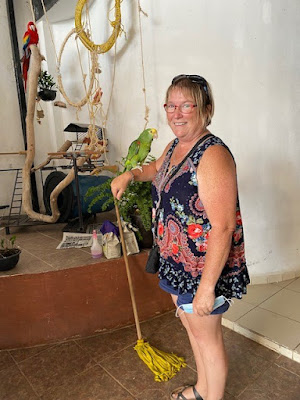 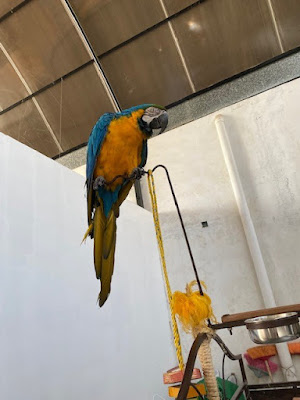 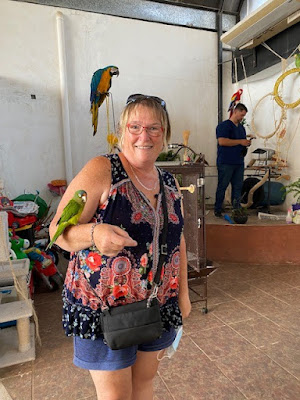 Meanwhile I was back at home watching some black squawky birds doing the mating dance.  It hard to get our heads around the fact that it is actually spring here.  Summer just seems to drag on and on and on for us. 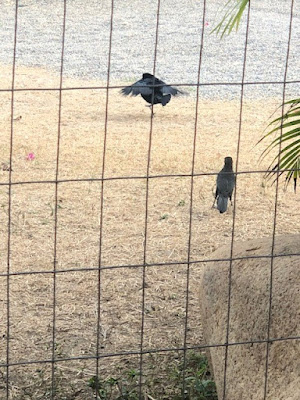 Sue didn't want anything to eat for supper because her and Kenia had pizza for a late lunch so I just went down the street to the local Hamburgesa vendor and got the Especial!!  Bacon Cheeseburger with fries!   All for 95 peso's and it was delicious.   Come to think of it, the picture doesn't really look all that appetizing does it? 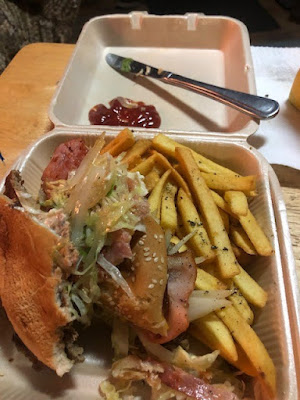 A little bit of action from Rudy the guard dog and escape artists Monty and Milo the resident great Danes topped off our evening.  Luis and Candice and Journey zipped them in their gazebo and went off to supper.  Now you gotta realize that although they are big dogs, they don't have a vicious bone in their bodies, however if they ran over you, you could have some broken bones I'm sure.  First defense is not to get in their way and keep something solid between them and you until they play out.   It was fun to watch them just loving life and romping around.  It didn't take long and they came and stood beside me all tuckered out, so we put them away where they belonged.  That was it for our day and we eventually headed off to bed.  Goodnight!! 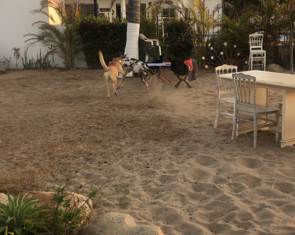 Posted by Lorne Green (A Place Called Away) at 22:00:00
Email ThisBlogThis!Share to TwitterShare to FacebookShare to Pinterest