Last night we gained another person in our group.  Janice showed up with her Redwood and pulled in beside us.  She was here early enough for the fire last night so we all got to meet her then.  She is a friend of Brian's and has come to hang out with all of us for a while. 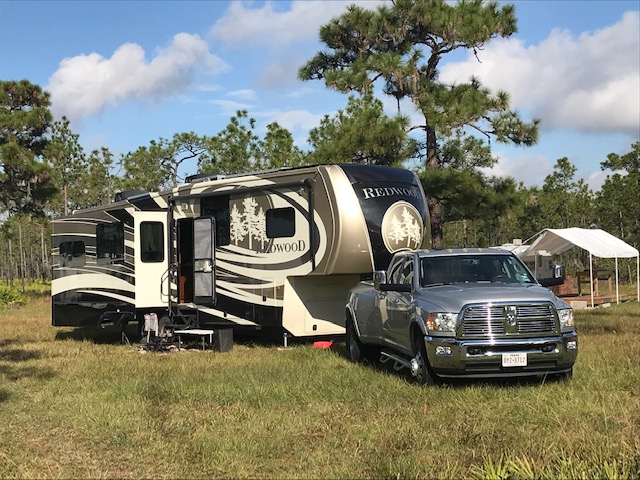 It wasn't long after that a nice little 1960's vintage trailer showed up in Brian's place What a neat little trailer and it had been all redone inside.  She spent a little while with us chatting while the work was being done. 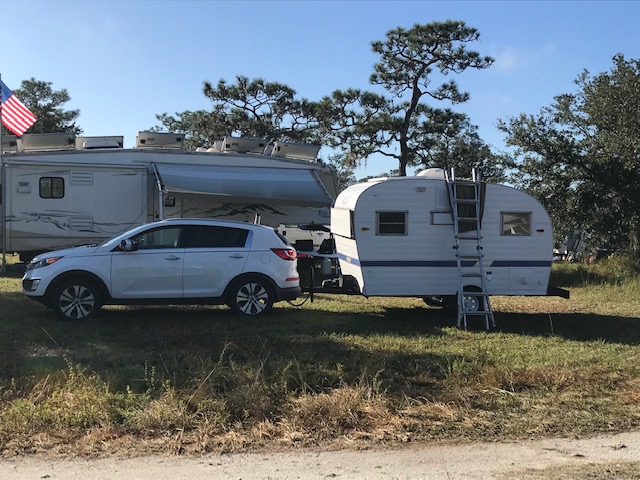 Jerry was busy this morning rigging up a grate that hangs over the fire to cook on.  He is planning to cook some ribs for the "Throw down" this afternoon.  There are a lot of different names for this kind of a meal and we in Canada normally call it a "Potluck".  Our friends in Wisconsin call it a "Dish to pass" and our new friends call it a "Pitch in".  Whatever it is, I'm sure there will be lots to eat, and I will over eat as usual.  Any how, Jerry was getting the coals started on the fire ready to cook on later. 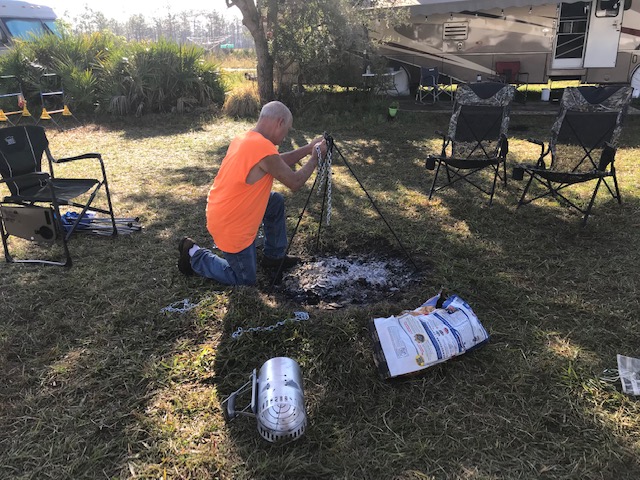 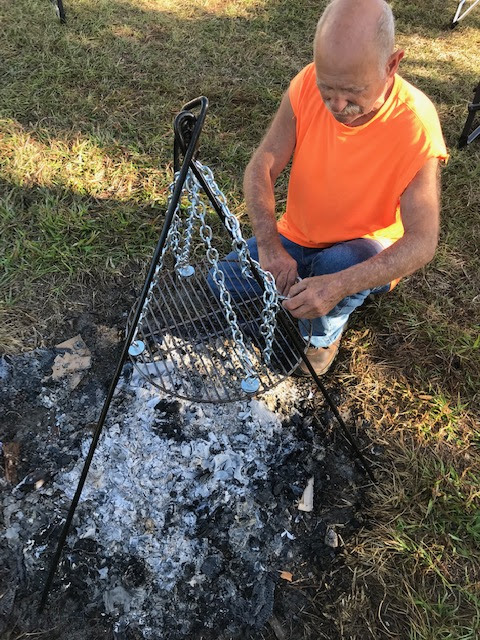 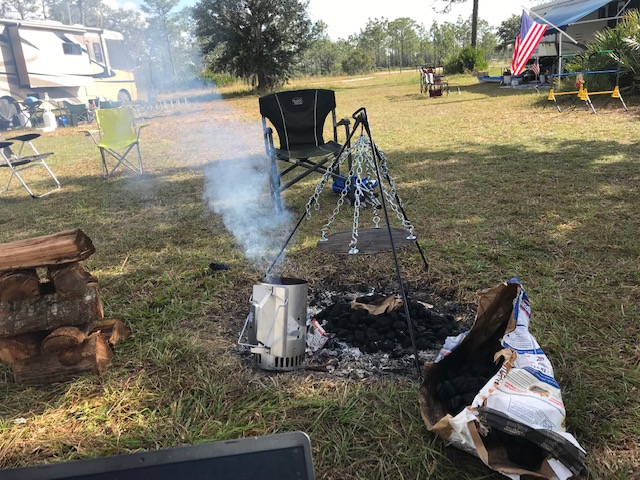 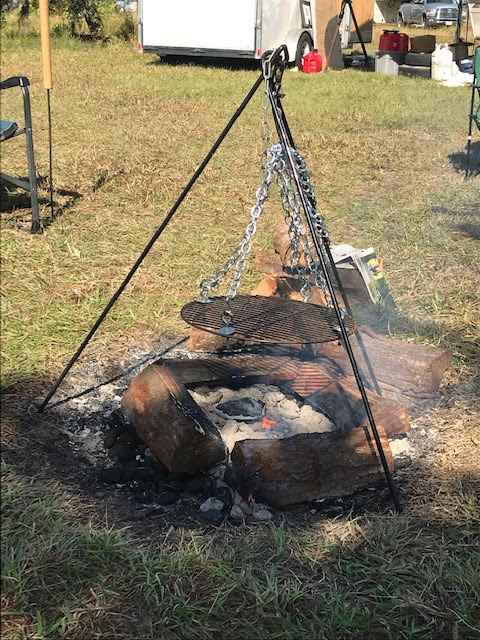 It wasn't long and he threw on the ribs to cook.  They had a long slow cook over the coals and fire. 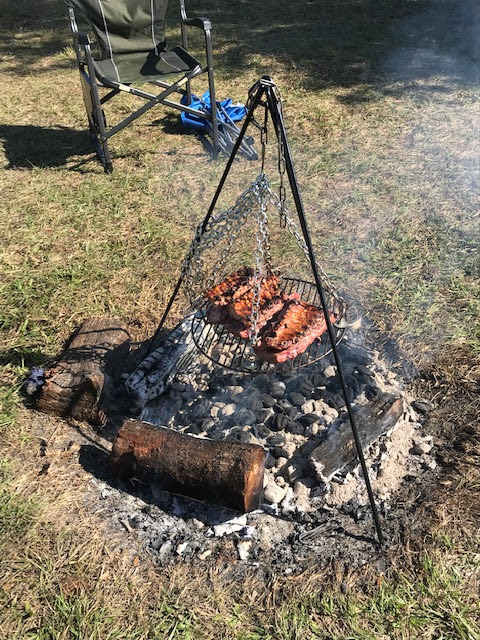 Then it was the chickens turn.  Mmmmmmm 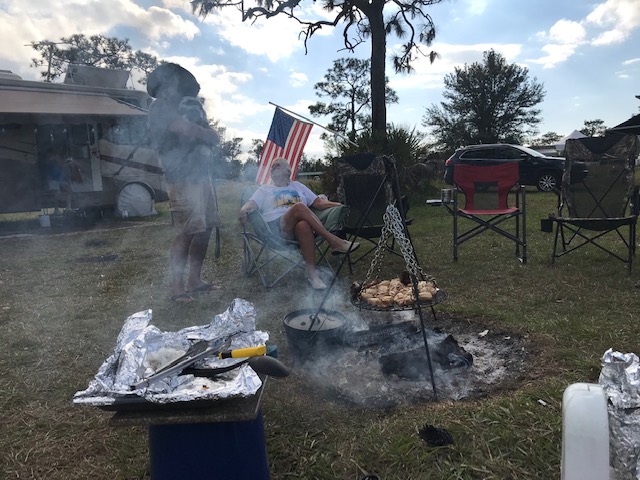 While I was watching all the meat cook, a neat little butterfly stopped briefly for a visit.  Anyone know what it is? 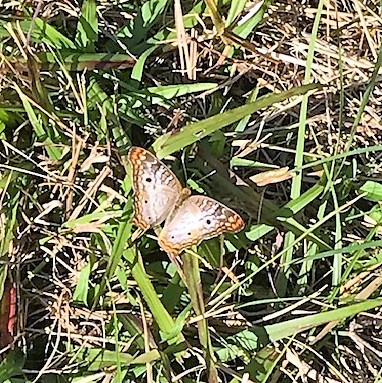 Deb has continued to work on the little Christmas tree and its looking good.  I think it comes from up where the hurricane blew all the trees down.  It now has lights as well and looks really good. 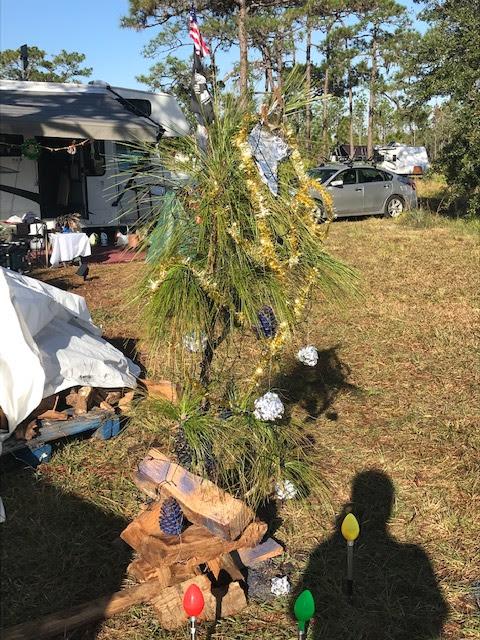 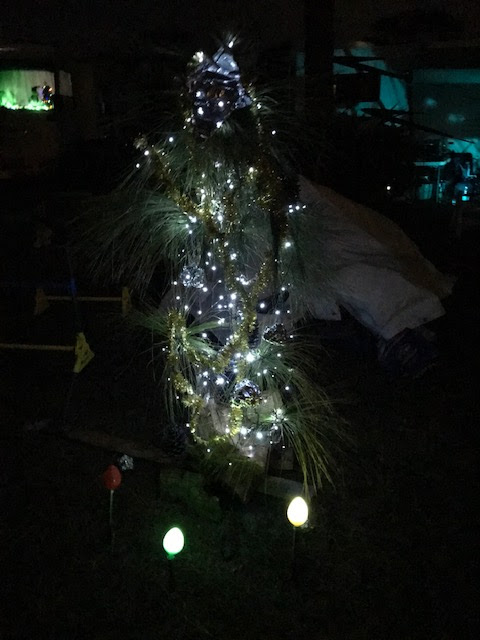 She also has a spot for her Christmas stockings to hang on their little RV signpost. 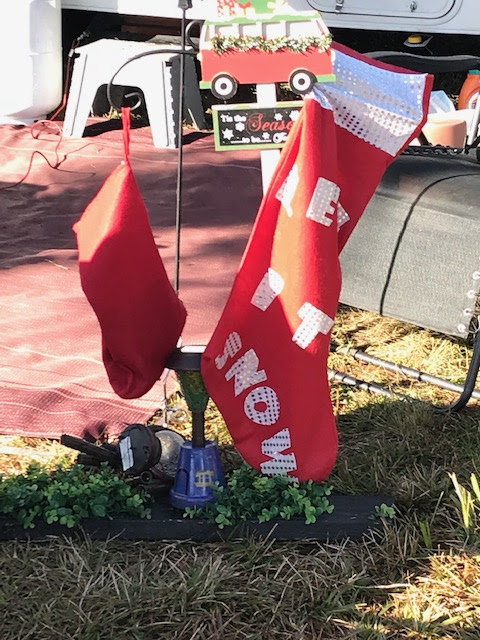 Soon it was time for the Throw Down.  And oh what a meal it was.  Salads, baked beans, potatoes, chicken, ribs and the Honey buns that Harold's wife had made, (bought at the Golden Corral) lol.  Deserts like pie and buckeyes and rice crispy cake were the sweets to choose.  Just like every pot luck, there was way too much to eat. 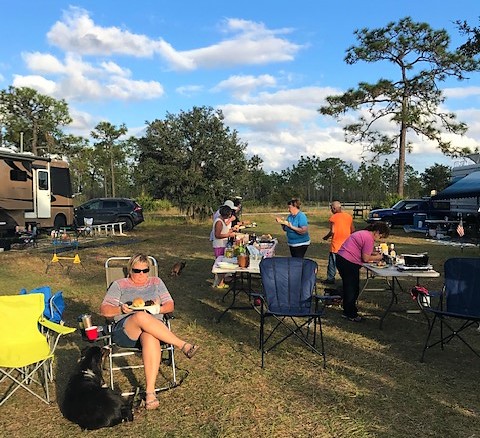 John and Brian spent a little time playing with their new Gimbles for their phones.  These things make videos easy because there is no sudden movements at all.  I think John is snoozing. 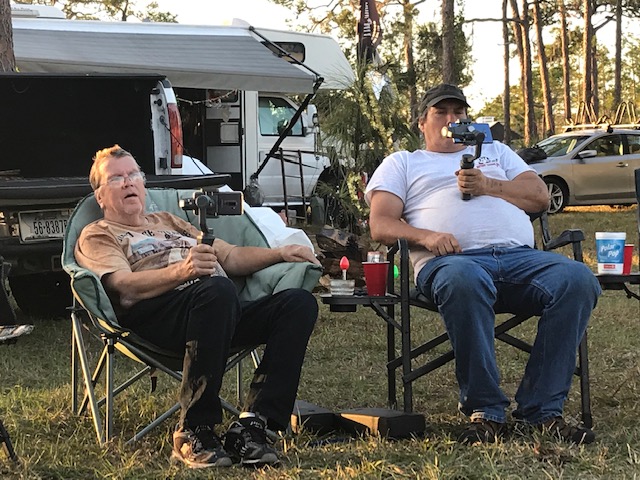 They were actually videoing some of the guys who were playing ladder ball.


After supper and games were over, John got out his Karaoke equipment.  Everyone gathered around to be entertained. 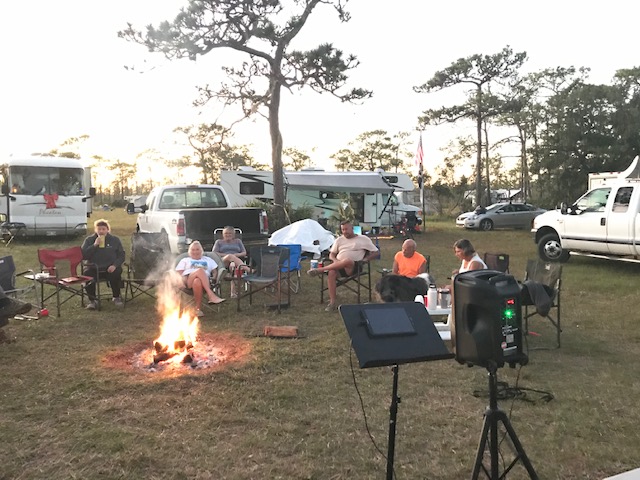 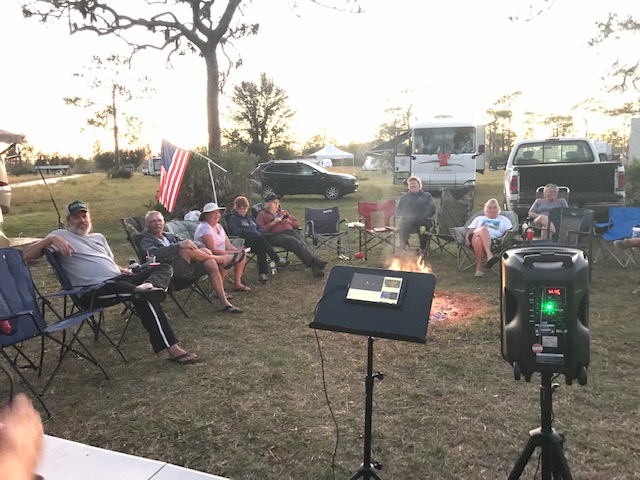 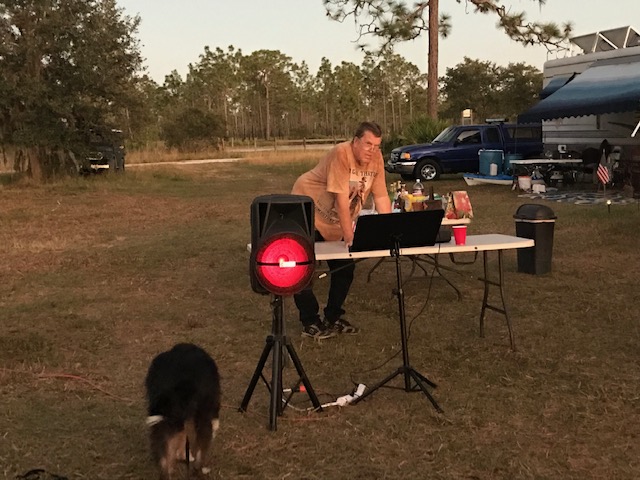 Sue and I had not been around for any of the previous karaoke so we had no idea what was going to take place.  John started the evening out with an Elvis song and OMG!!!  He could sing exactly like Elvis, in fact he was a little better I think!!  I was amazed. 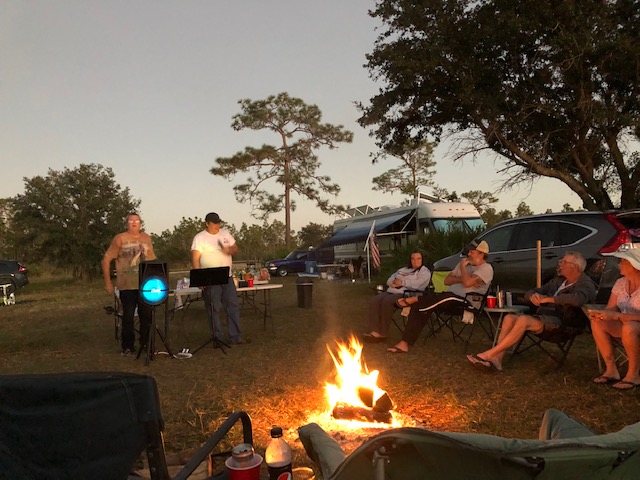 He sang a few songs and wowed us and then shared the mikes with the Soggy Bottom Boys.  John, Brian, Ron, and Andy entertained us for a while.  They were good as well.  While we were sitting there listening, our friend Jack, who is a local who comes to visit all of us, was singing the songs just sitting in his chair.  Sue was listening to him and encouraged him to get up and sing with the boys.  He did and he had one of those raspy country voices and he could sing like nobody's business.  Jack, Ron and Andy entertained us for quite a while.  I think they all should take this show on the road. 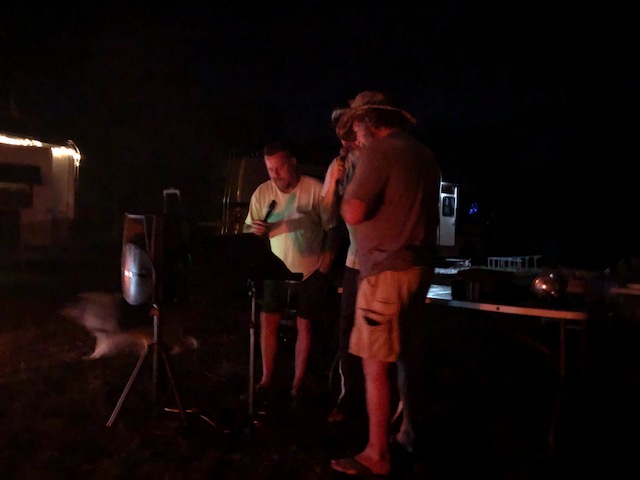 We all sat and listened until it was time to head to bed.  We thank all who sang for the entertainment tonight and we hope there will be another round very soon.
Here is the view around the Ponderosa tonight: 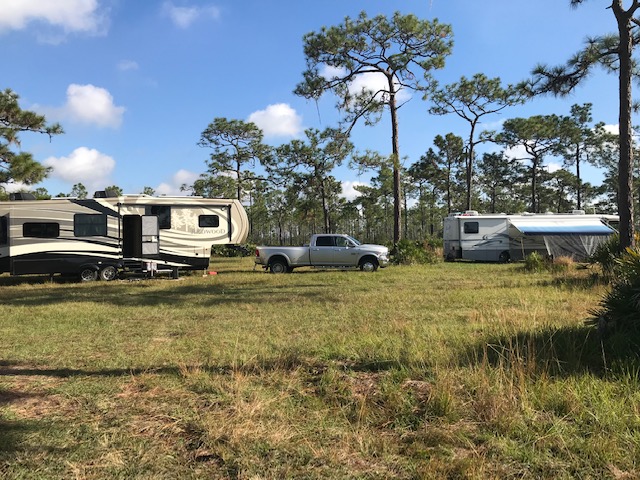 Posted by Aplacecalledaway at 08:36:00
Email ThisBlogThis!Share to TwitterShare to FacebookShare to Pinterest