Today we decided not to go back to the RV Show,  but rather find some neat stuff to do around Tampa.  First order of business was to take in the FREE continental breakfast at the hotel.  It was a great breakfast with waffles, boiled eggs, biscuits and gravy and cereal and fruit.  And of course coffee or juice.  Now one could argue that this is not free but rather added into the price of the room.  Work with me here just for a few moments and let me think it was FREE.  While we were eating we looked out the window and the front desk guy was having a Vape break.  For a minute I thought he was on fire.  I'm not sure how vaping works, but this can't be good for the lungs. 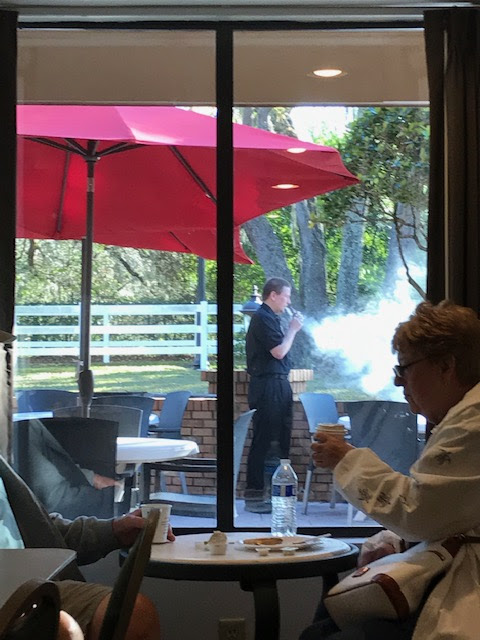 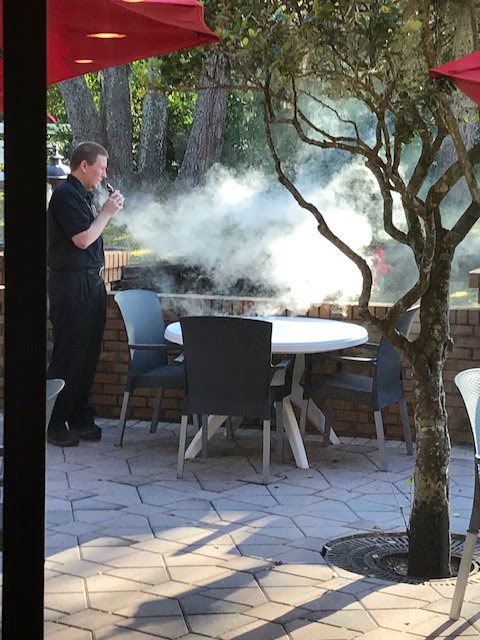 We thought that maybe a trip to see the Manatee's down at Apollo Beach might be a good thing.  This is an area where the warm water outflow from the Big Bend Power Plant attracts them to warm up.   The first thing I thought of when I saw the power plant, was that young man vaping this morning. 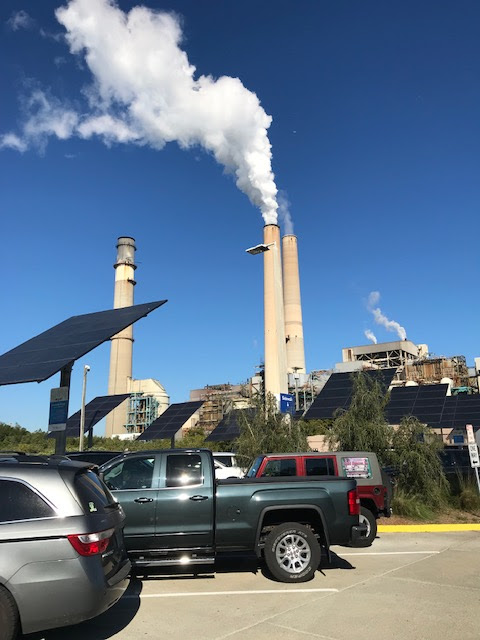 The girl at the front gate told us that the manatees were out in full force this morning and that there were about 200 of them down the boardwalk so off we headed.  Did I mention that this attractions is FREE!   I love free. 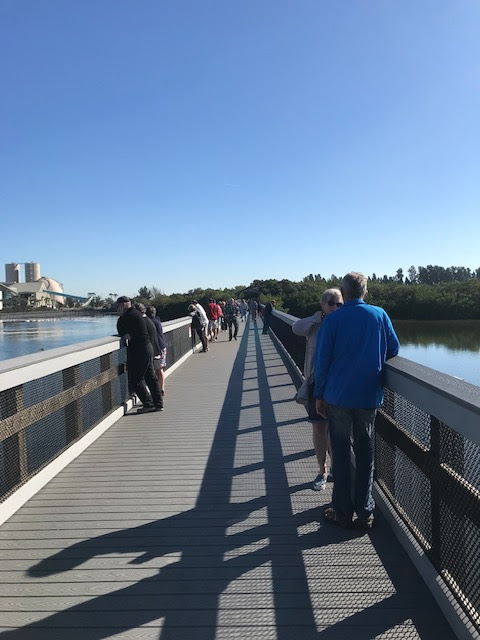 I got a few pictures of the Manatee's just lazing around in the warm water from the plant. 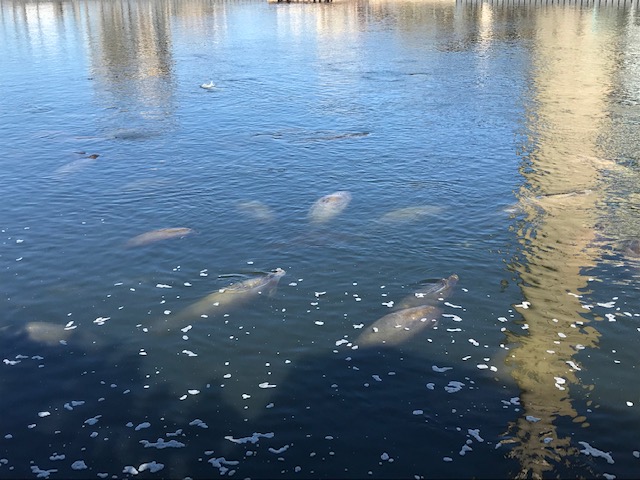 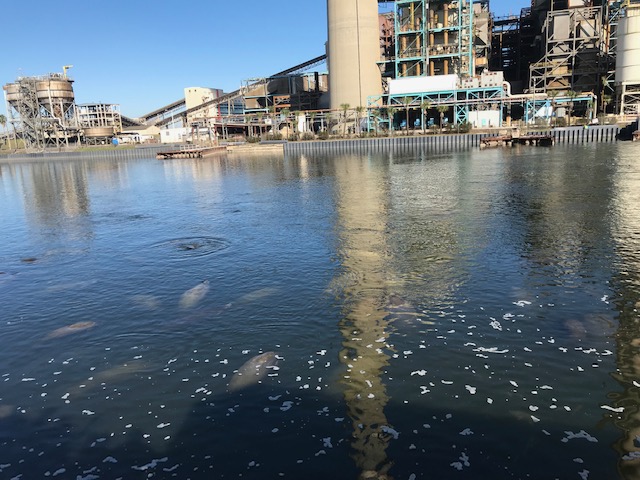 There were a lot of Tarpon fish around the Manatee's it seemed.  I think they use them for protection because, although I didn't see it, there was a Shark cruising around looking for lunch.  Tarpon are fairly large fish themselves and must be 3 to 4 feet long. 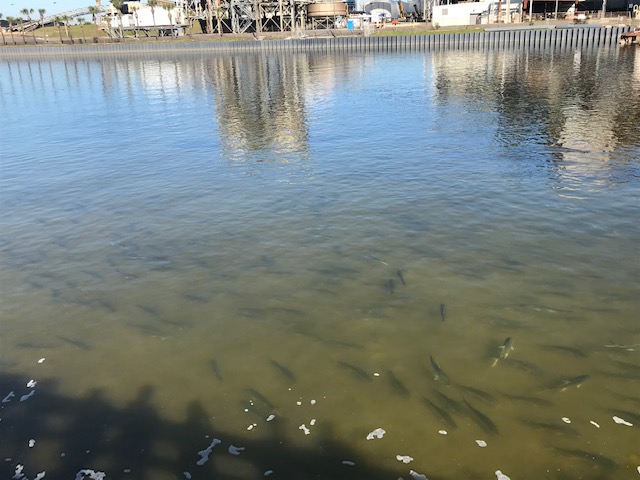 We enjoyed just watching all the action in the bay.  Back at the main gate they had a place where you could touch the Sting Wrays.  They feel kind of silky as they glide by your fingers.  No one ever said what they might do if you make them mad.  They just said to use only 2 fingers to feel them.  Guess that way you won't lose all five fingers if they do slap you. lol 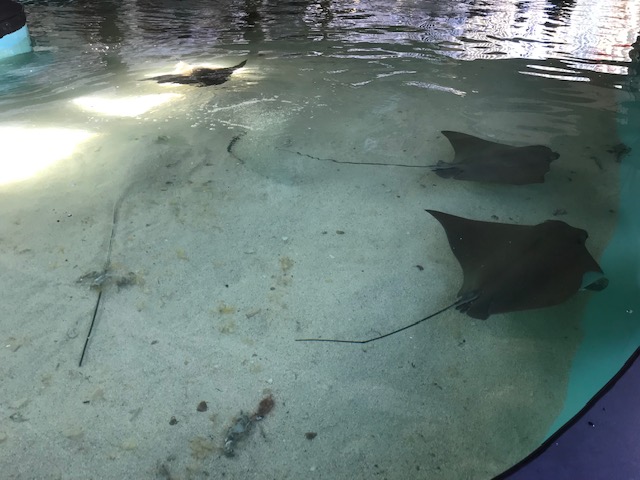 The girls wanted to go look at a spot where we had though about going to camp for a few days but there was no availability right now.  They said if you wanted a spot you need to be lined up at the gate at 5 am.   Thats not for me thanks.  It is right on the bay and if you look across to the West you can see the city of St Petersburg and if you look to the North you see downtown Tampa.


The view out over Tampa Bay was great.  We didn't see any ships coming or going and it was not quite FREE.  They charged us 2 bucks to get into the park.

By this time we were getting hungry and I had mentioned doing the trolley ride up in Ybor, which is the old cigar district of Tampa.  It has a lot of Cuban roots and the downtown area has been refurbished back to what the 50's era was like.  So thats where we went next. 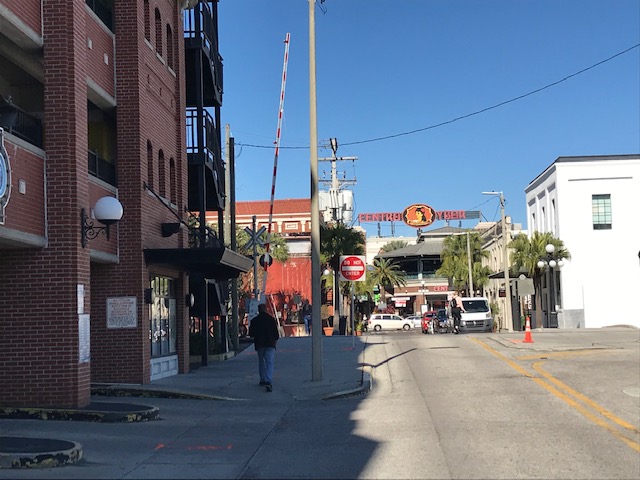 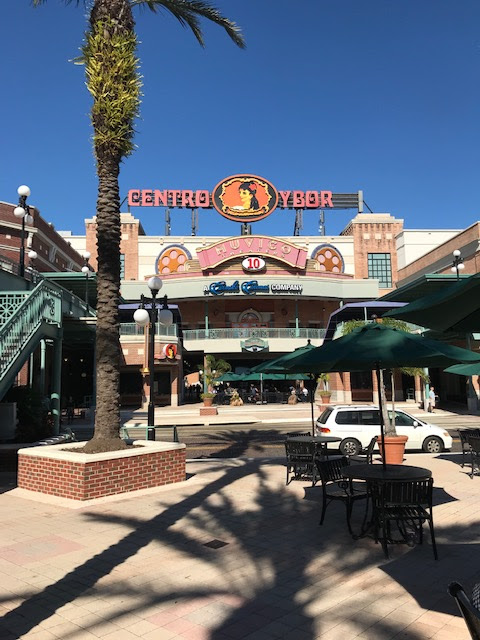 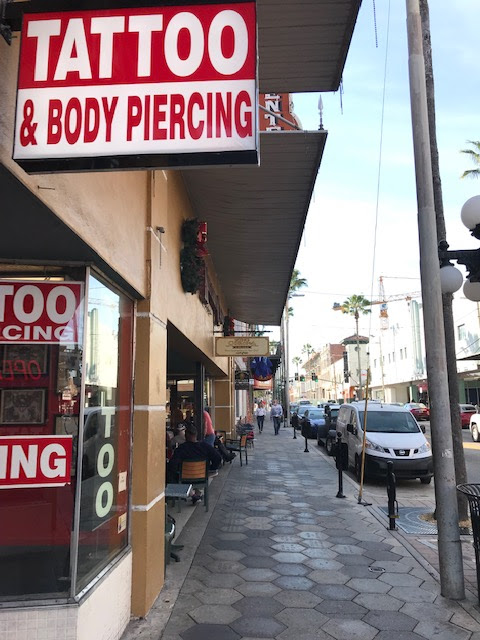 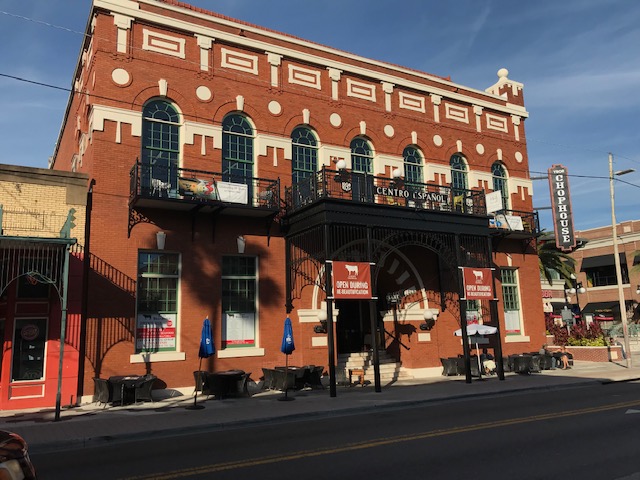 The girls looked over the shoulder of a guy with a newspaper and found an add for a neat little bar and grill just up the way. 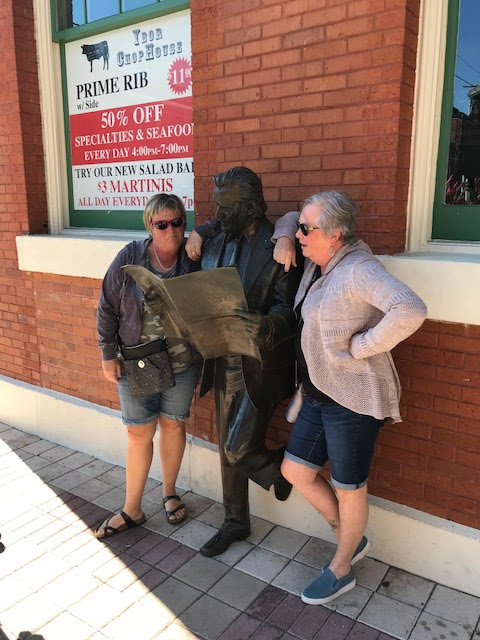 We headed over there and set ourselves down for a while.  The waitress was fantastic and recommended some good food and drinks. 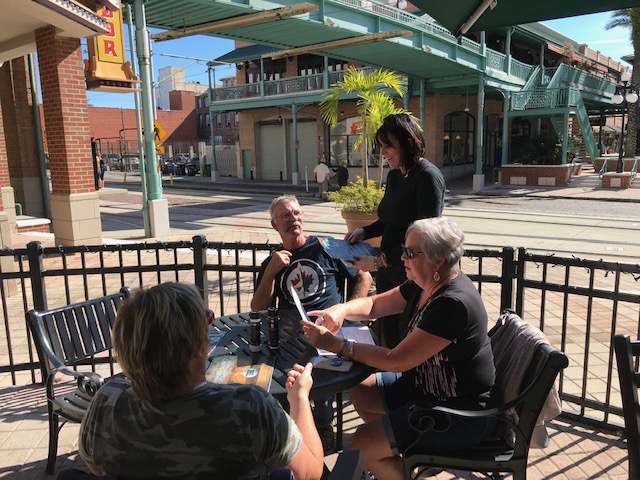 I wandered around and got some shots of where we were sitting while we waited for our food. 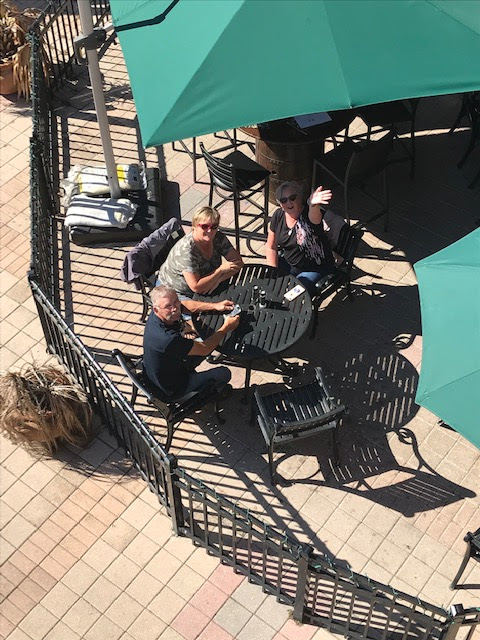 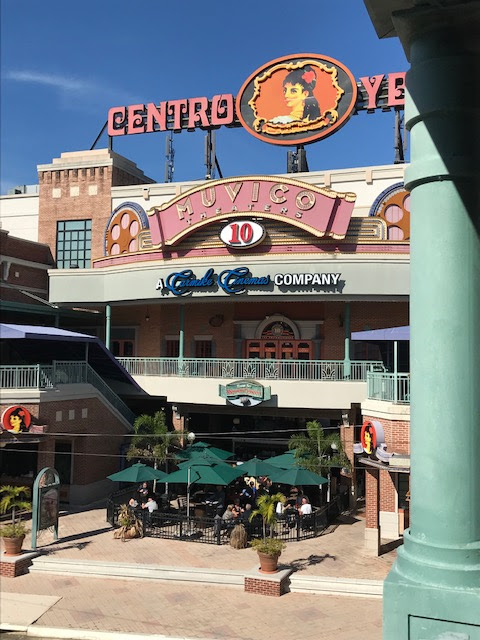 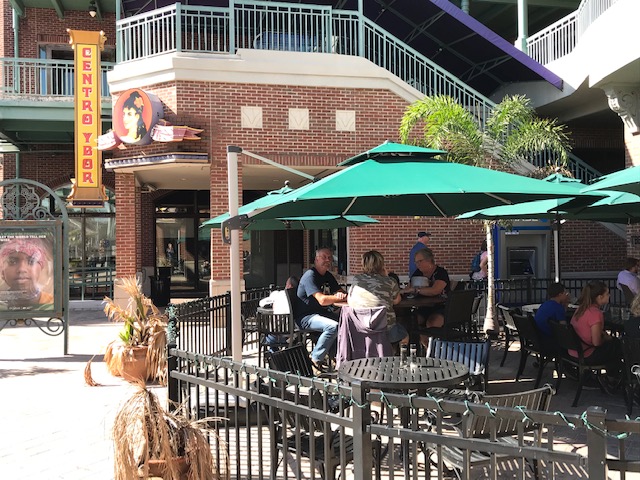 We just happened to be right by the main trolley station so won't have to walk far to catch it. 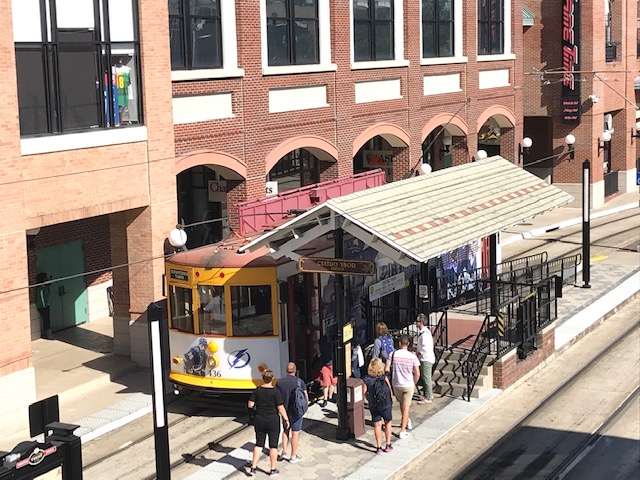 Just inside the little mall and outside the bar door were some patrons playing Corn Hole.  That is one game I have not played yet and it looked like they were having a lot of fun.  Maybe we will have to get one. 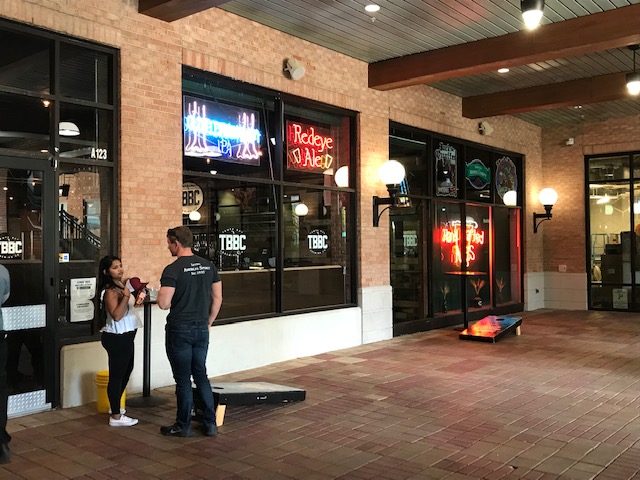 Our waitress took our traditional eating picture to prove that we were there.  Although lunch was not FREE, it was very good. 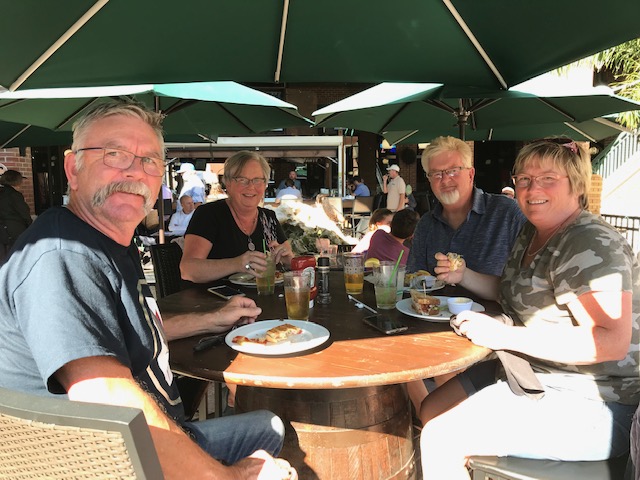 After we finished lunch, we jumped on the trolley to take a round trip through the cigar district and down by the port. 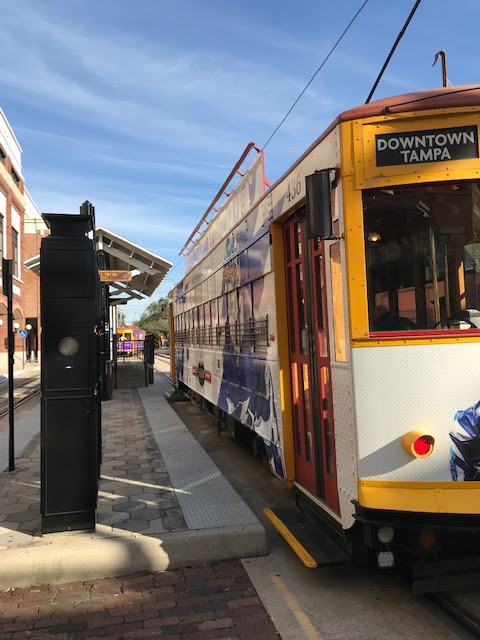 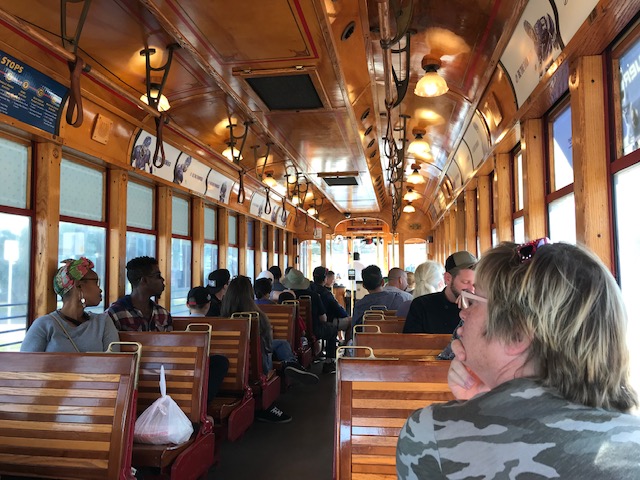 We saw the Tampa Ports where all the big cruise ships come in.  The Norwegian Pearl was in port today. It is a big ship. 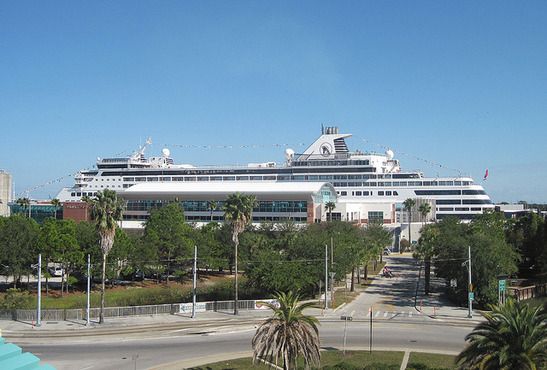 We went right past the back end of Amalie Arena where the Tampa Bay Lightning were going to play the Toronto Maple Leafs tonight. (Score was 4-2 for Toronto) 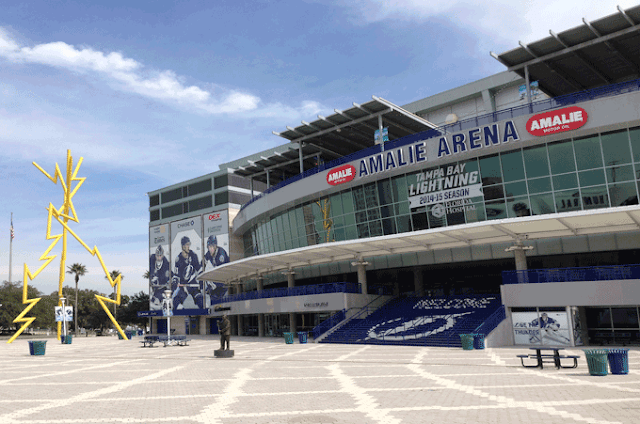 Our operator was quite busy herding this trolley down the street in amongst all the traffic.  Lots of bell clanging and horn tooting and even a little cussing, but he got us there.  Oh and did I mention that it was all FREE! 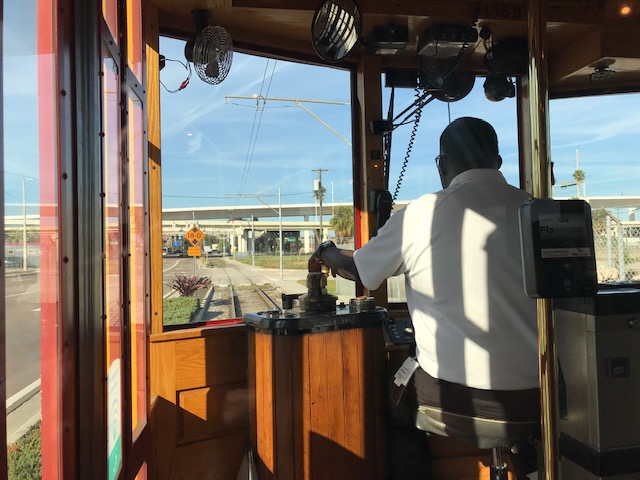 On our way back to the car parking lot, we heard a rooster crowing.  Low and Behold there was a flock of chickens and roosters just hanging out by the railroad tracks right by the main street.  It brought back memories of when we visited Cuba where we heard roosters crowing all the time. 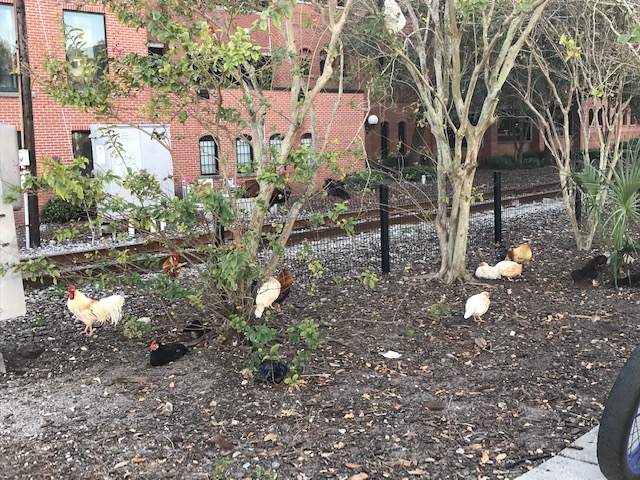 Because it was dark when we got home, here was the view out our window on Friday morning.  Everyone must have enjoyed a good bonfire last night. 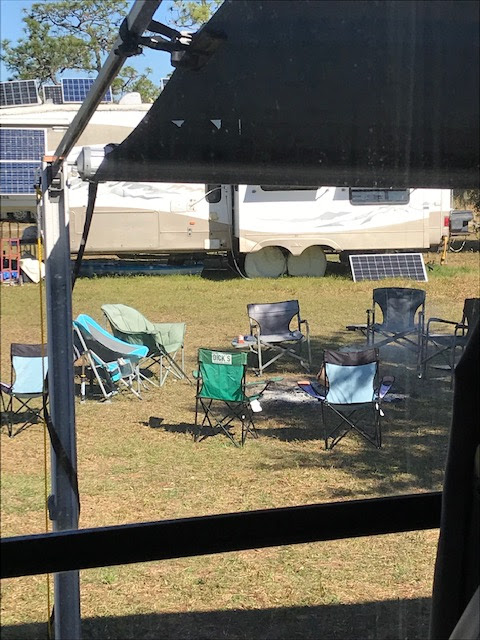 Posted by Lorne Green (A Place Called Away) at 12:03:00
Email ThisBlogThis!Share to TwitterShare to FacebookShare to Pinterest