Its hard to believe that this is our 4th winter in the southern US and we have been living full time in the Ponderosa as long.  It took a great leap of faith for us to decide to sell everything we have and move into our Class A motorhome.  We had to make a lot of decisions based on pure faith mixed with a little research, but the final decision was made by following the lead of some people who we knew only from social media, and who later became real friends.  It takes a lot of guts to pack up and head out into the wild yonder not knowing what tomorrow will bring.  A good friend of ours has written a book about her life and the decisions she had to make as she moved through life following her dreams.  A lot of what she writes about, is what brought us full time RVers to where we are today.  The fact that she was by herself just compounded the fear I'm sure, because those with partners at least have someone to discuss important day to day decisions with and she didn't have that luxury.  I encourage anyone to get her book which is available on Amazon for your Kindle.  You can order it by simply clicking on our link to Amazon up on the left side bar of this blog page, and searching for the name of the book.  Fear Less vs Fearless   It only costs $6.00 to get it and the money will go to maintain Malia's travel journal long after she is not in this world to share it. 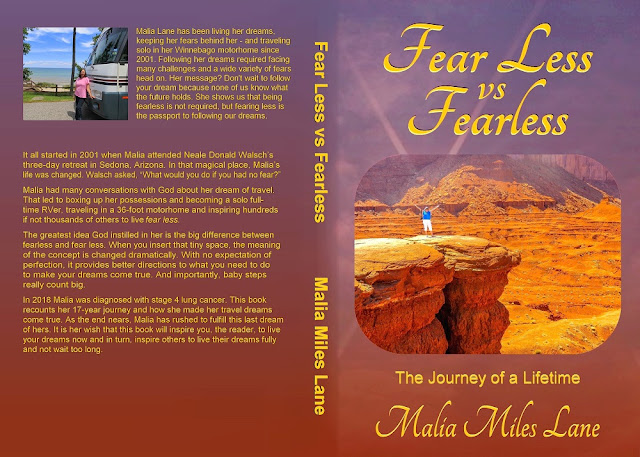 I want to tell you why I am promoting this book.  Back in 2015 we met a lady out at Government Wash at Lake Mead near Las Vegas.  She joined our group to spend a few days relaxing there.  She came to us because she knew Kyra and because we were there, we got to meet her too.  Her name was Malia Lane and she was a solo, lady RVer.  When I think back to that circle of campers, I remember that there was us and 4 other solo lady RVers there. Besides Kyra and Malia, we also had Linda Regan, and Joan Albright who was 86 years old at the time.  People laughingly referred to our group as Lorne and his Harem.  Malia at that time was having battery problems and she was having trouble understanding how the whole system worked.  In her case, it wasn't working very well at the time.  When you are boondocking, it is very important to have a reliable source of power and enough batteries to store it for night time.

One of the things I have learned early in my boondocking days was that if there is a solo lady in the desert boondocking, she will probably not appreciate input from a guy who is helping only because he wants to show off his manliness.  If these women are out there in the first place, they are there because they are strong willed and are not afraid to tackle any task and see it through all by themselves.  There is no room for girly girls in the desert!  Rattlesnakes and scorpions do not play games!  So I tend to take some time to get to know them first and prove to them by example, that I am not there to lord over them, but rather to offer any help that I can offer from my lifetime of experiences in troubleshooting.  I always say that I profess to be a "Jack of all trades and a Master of none".

This was the approach I had to use with Malia to start with.  She had just arrived with us and I could see that she was frustrated to the point where she was considering quitting boondocking and just living in parks for the rest of her life.  I tried to gently persuade her that this was only a small glitch and that she could solve it easily and showed her how we could monitor it for a while and figure out what was going on.  I remember distinctly how she got so frustrated that the tears welled up in her eyes and she began to cry.  Now what the hell do I do??  There is nothing worse than a crying woman in front of a guy.  We get very nervous very quickly.  I had to be careful not to cry along with her, so I did what any red blooded person, male or female would do, and gave her a big hug!  From that moment on we were on the same page and the next 10 days or so went without a hitch....until her fridge quit!!!  Oh the joys of an RVer!!!  But that is another story.

We spent some awesome times together at Lake Mead and Stewarts Point over the next few days and even had an Easter potluck right there in the desert before we all went our separate ways.  We have followed Malia on her adventures ever since via blogs and Facebook and her insight into life is second to none.  Her bold account of her encounter with cancer and how she shares her inner most feelings as she prepares to bid this harsh old world farewell, is amazing.  It is my hope that her account will assist others if they are travelling the same path as she is right now, and I'm sure that her book will encourage many who are thinking about making scary changes in their lives.

Sue and I are so blessed to have met Malia, and truly consider her our friend even though we only spent a short time with her.  Her strength is staggering, but I also had the opportunity to see her soft side.  Strength is not always rough and tough, but rather persistent.  Thank you for your time in our lives Malia.  We love you and I would love to be there to give you one more hug!
Posted by Lorne Green (A Place Called Away) at 07:58:00
Email ThisBlogThis!Share to TwitterShare to FacebookShare to Pinterest