A Touch of France

A couple weeks ago some of our friends stumbled across a cute little restaurant in Melbourne FL called La Crepe De France.  They fell in love with the food and have made plans for us to revisit it today.  The neat thing about it is that our newest friend Laurence is from France originally and is living in a Motorhome now and we have come to adore her and her French ways.  We are excited because this will be like a little walk back into her culture roots.  So off we went to La Crepe for brunch. 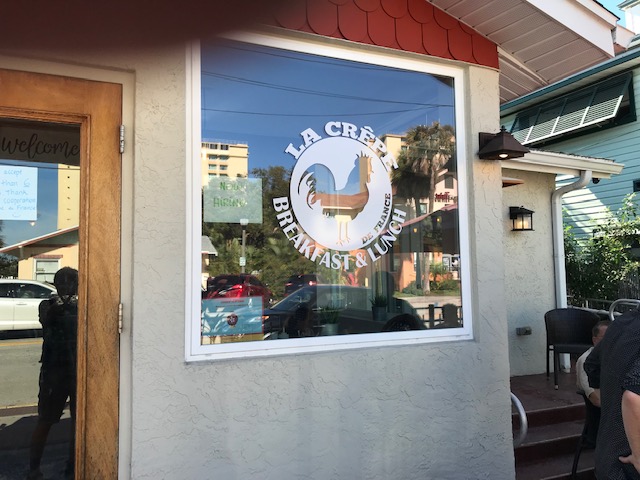 Before I tell you about that I have a little story to share with you.  John and Val have been getting their solar installed and before they did they were parked with their door facing the inside of the circle.   Charlie is used to going to their door every morning for his treat. 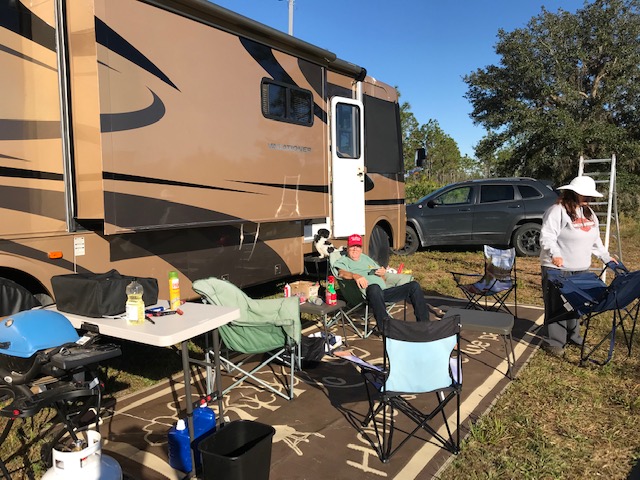 When they finished their solar install they came back to the circle, however because of the way the panels tilt, they wanted to park the opposite way around to maximize the suns effect.  Charlie didn't realize that they were parked opposite and went and sat right where the door would have been.  It looked so cute.  He kept waiting for that invisible door to open. 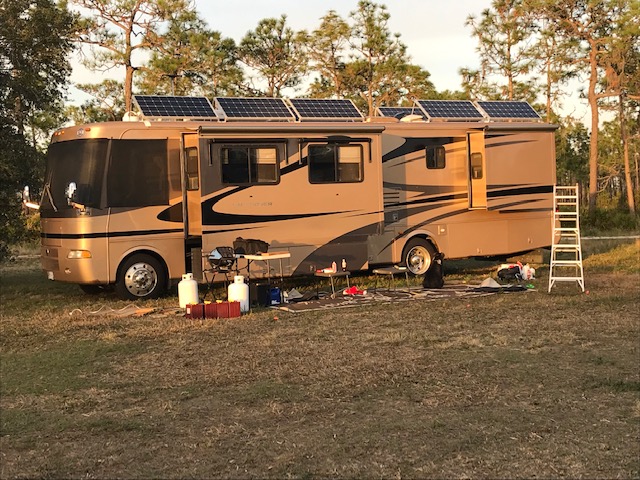 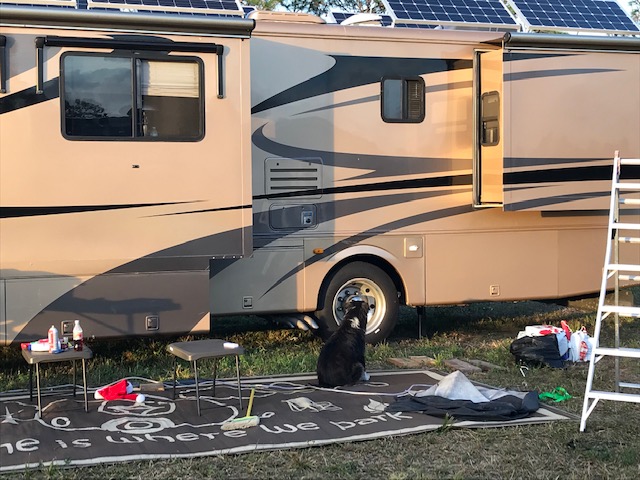 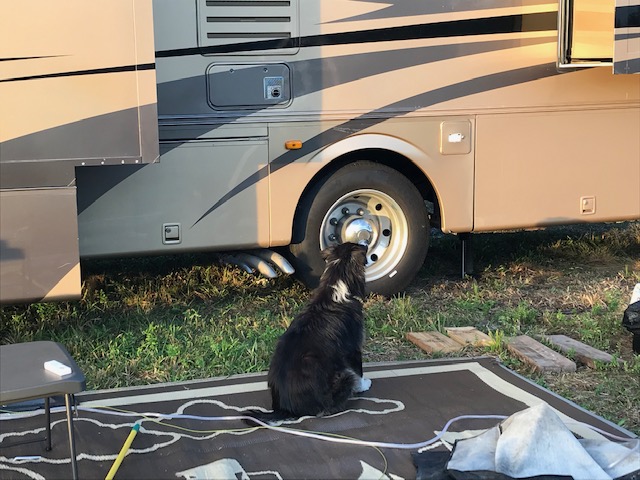 So on with today's story.  We arrived in Melbourne just in time for our 11:30 reservation.  Gregory, who is the owner of La Crepe De France,  had put some tables together outside under some umbrella's.  I didn't get a good picture but there was John and Val, Jerry and Deb, Brian and Sue, Pat and Harold, Laurence, and Sue and I. 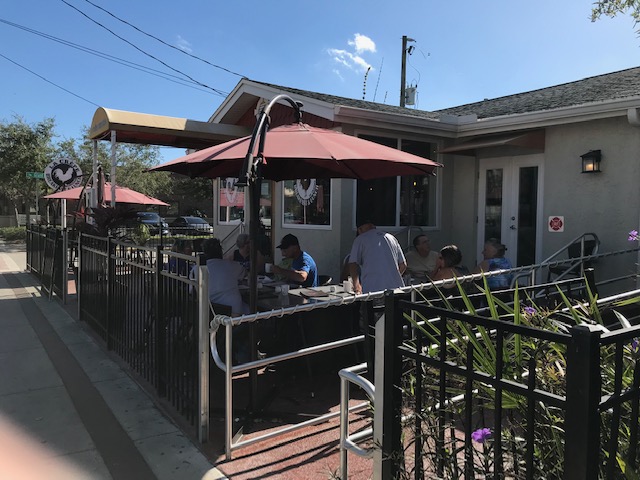 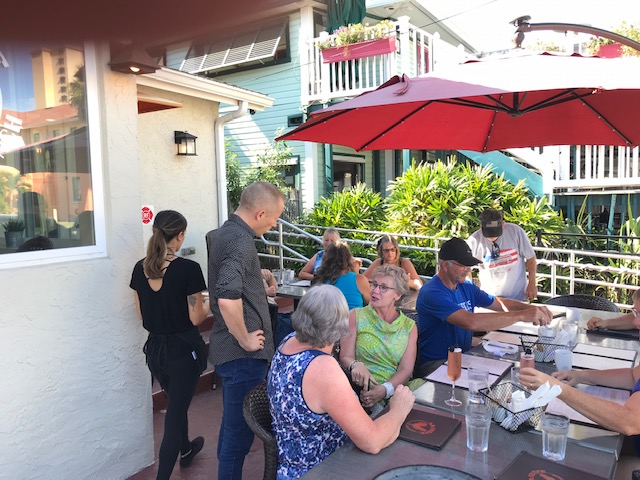 It was a hot morning so a memosa for the ladies was in order.  It came with a blackberry as well. 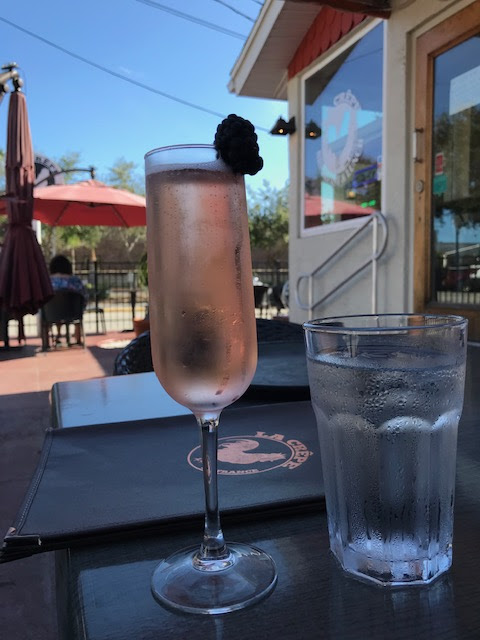 Then the interesting part began.  Gregory came out to speak to us and immediately took to Laurence.  They were speaking French with a lot of excitement thrown in.  It was like it was a meeting of the minds and we completely enjoyed just watching them talking.  Gregory was a typical Frenchman with all of the arm waving and very flamboyant gestures and the more he spoke, the more excited he seemed to get.  It was wonderful. 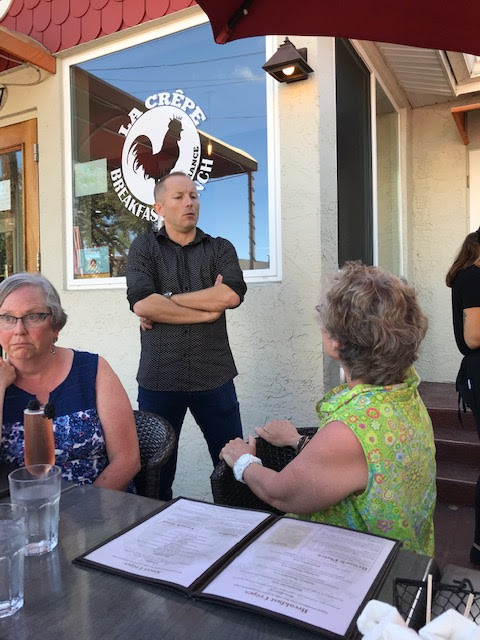 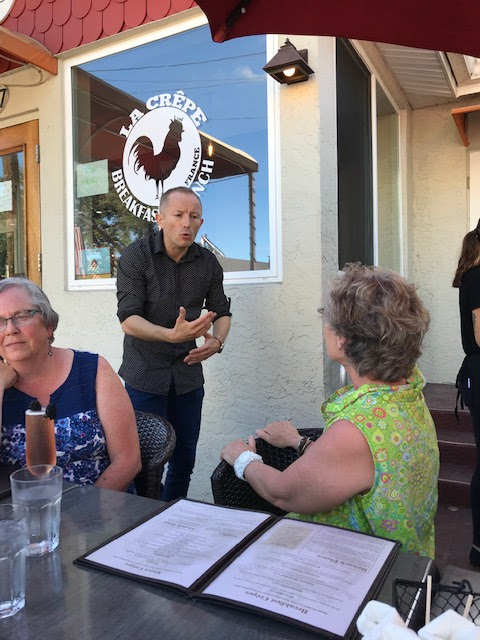 Our food was delicious and I had the Benedict crepe with gravy. 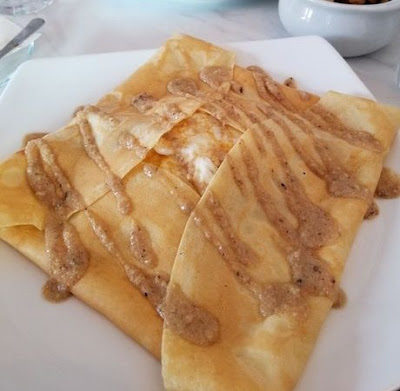 Laurence told us that the traditional French Crepe is a buckwheat one.  She had one and I'm glad I didn't because I couldn't get over the colour and texture of it.

Sue had an apple and caramel crepe for dessert.  It was a meal in itself.  Soooooo good. 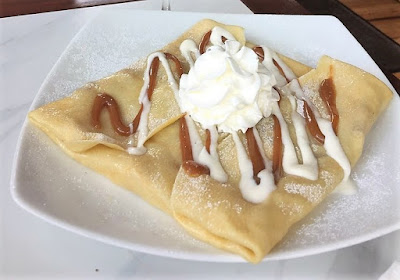 Thanks to the crew for inviting us along for a taste of France.  And thanks to Gregory and La Crepe De France for making such yummy food.

Our waitress was showing off her tattoo's and Pat faked taking a picture of it.  See on her phone is a picture of her grand daughter Ava and not the camera at all.  Shame on you Pat.  lol   She did actually take a picture in the end. 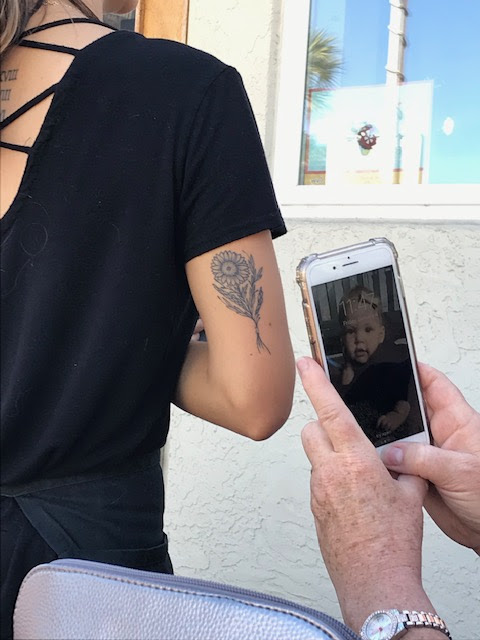 Speaking of Pat, some of you will have noticed for a long time I have been referring to her as Harold's wife.  There is a story to that.  One day we were discussing her name and she made mention that she was always known as Patricia and was never known as Pat in her younger years.  When she married Harold, he had a sister whose name was Pat and in order to solve the problem of two Pats in the family, Harold's mother proclaimed that she would not be known as Patricia, but rather as Harold's wife!!  So I said thats what I would call her too!  She would rather be called Patricia, which is a nice name, but I have called her Pat since I first knew her so I said that it wasn't physically possible for me to change at this stage in life.  As old as I am, it's lucky I can remember her name at all!  So that's the story.  I told her that after New Years I am going to revert back to Pat and would call her that lovingly as a friend.  Well its after New Years so here we go!!   Thanks for being a sport Pat!!

Pat showed off her neat gadget today.  It's a fan that plugs into the iPhone power outlet. Nobody had seen anything like this before. 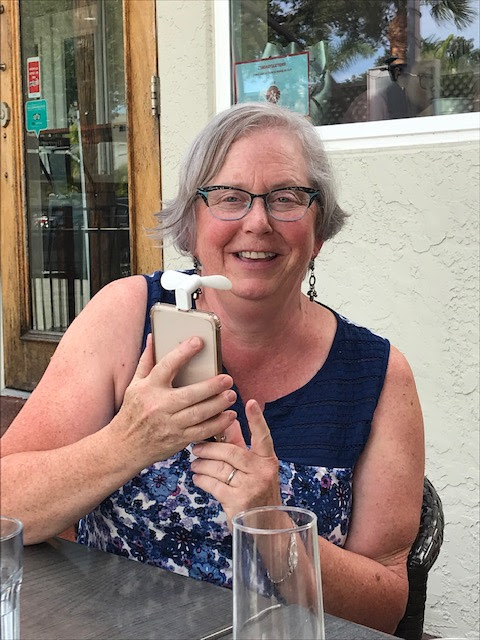 So I know one shouldn't show bathroom pictures but I had to.  In the little boys room was a replica of the Eiffel Tower in Paris.  Had to take a picture.  For a moment I wondered why something so elegant would be in the men's room and made sure I checked the sign on the way out.  Yes it was the men's room. 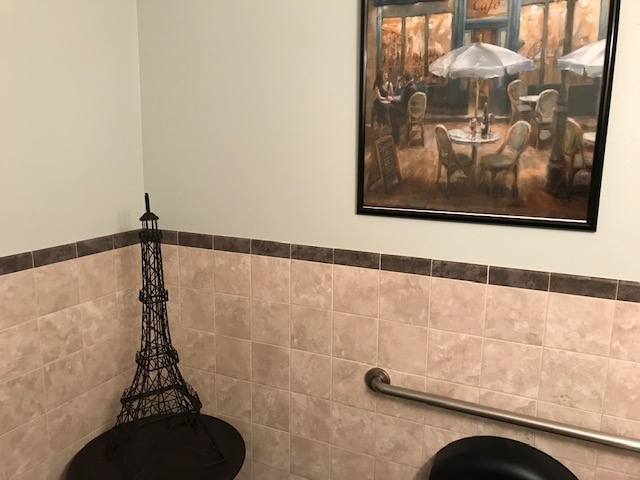 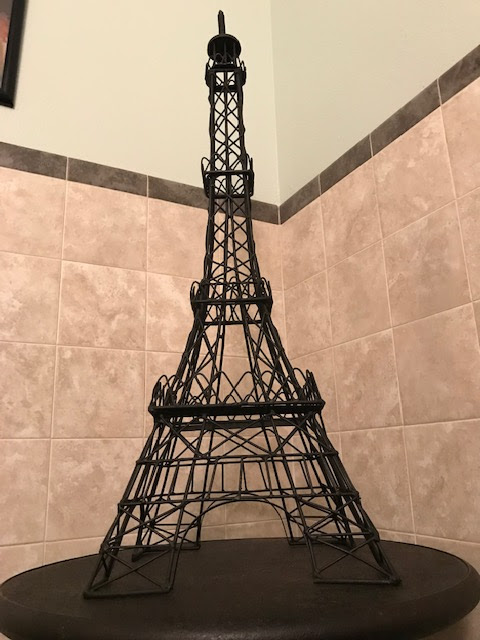 After our lunch we all headed down to the beach for some sun.  It was around 30C today so a nice day to work on the tan.  Sue 1 and Deb got into the water early and wore themselves out having fun in the waves. 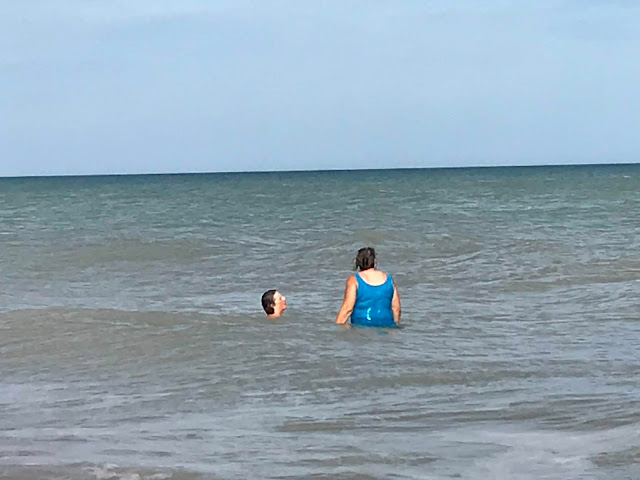 The rest of us lined up on the beach to do absolutely nothing.  Charlie went crab hunting.  It is sad to know that all the kids that went frolicking by, probably pointed and noted the OLD FOLKS sitting on the beach. 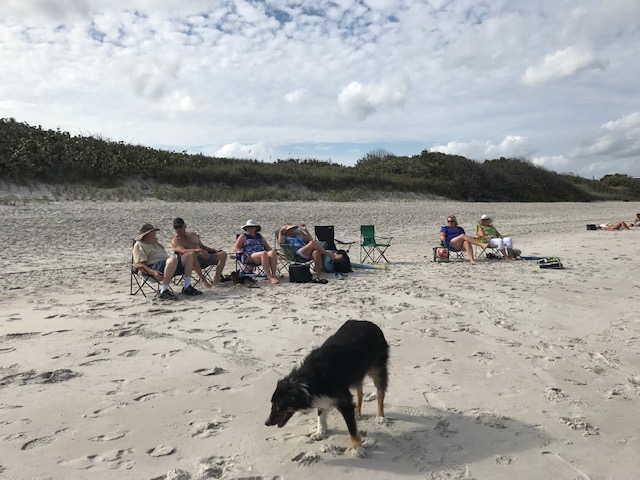 Brian lined up closer to the water and sat there until the water was up over his ankles.  His blue jeans got quite wet before he moved. 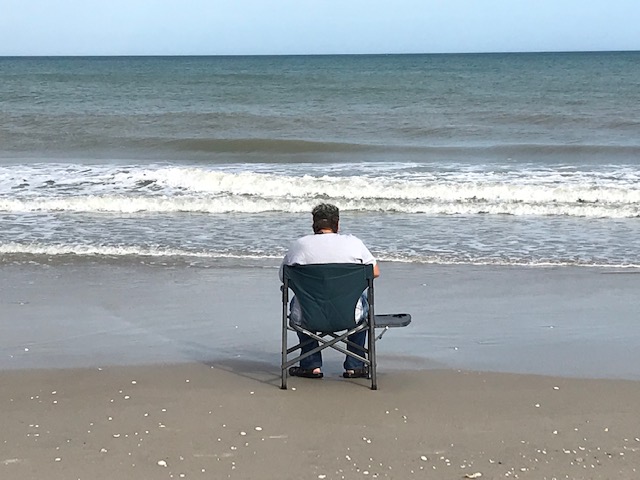 Paul loved the sand and it even got stuck to his nose. 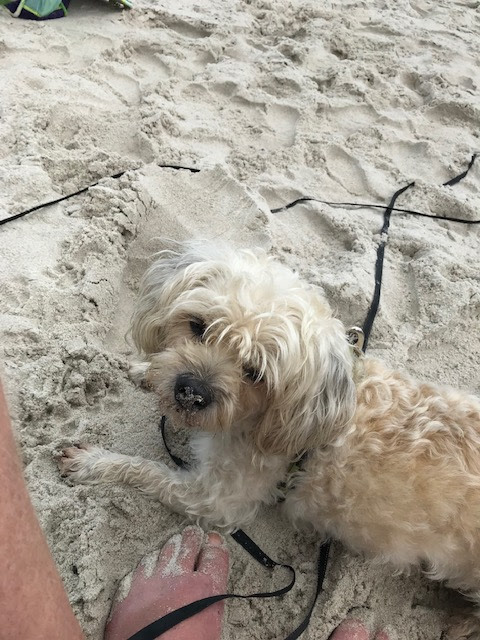 Laurence mentioned at the parking lot when we came back from the beach that my front tire looked low.  I said that we needed gas so I would check it there.  Well when we got to the gas station and I took off the valve cap, the top of the valve stem was loose.  I scratched my head and took the pressure.  Down 10 pounds.  No sign of it leaking there, but it must be.   When Laurence came back I went to show her and the top of the valve stem came off in my hand and the tire spewed air everywhere.   Lucky enough I shoved it back in and it stayed until I could pull the Jeep away from the gas pumps.  There we proceeded to change the tire. 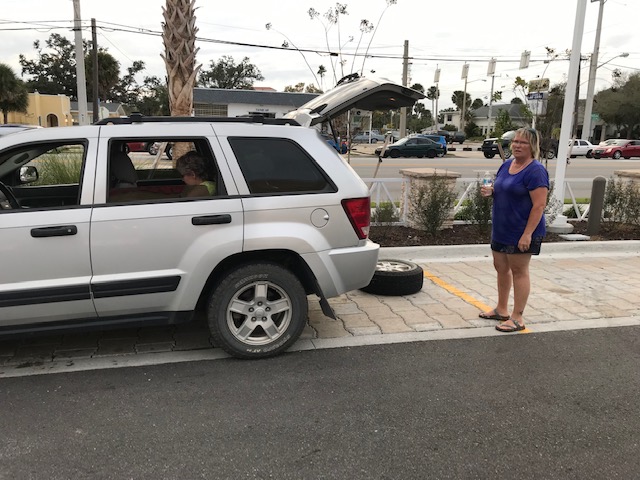 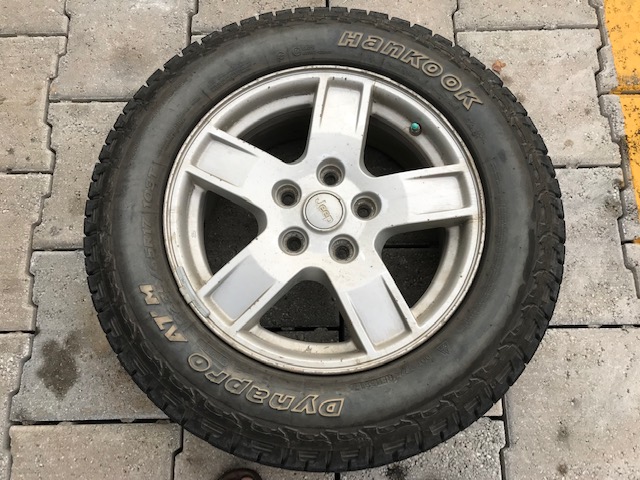 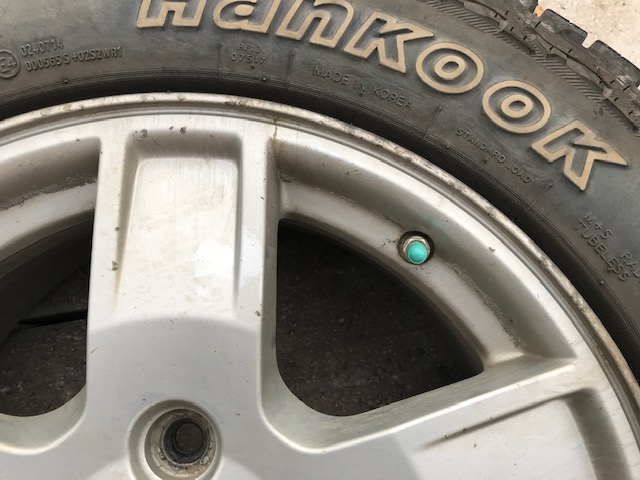 and landed out in the parking lot.  Good thing this didn't happen at 70 mph on the highway. 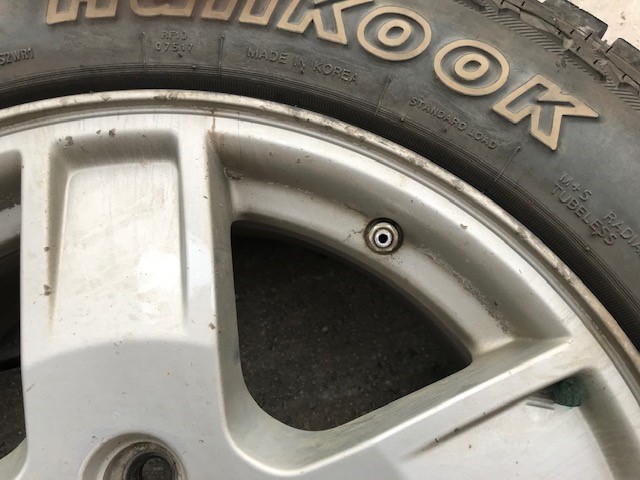 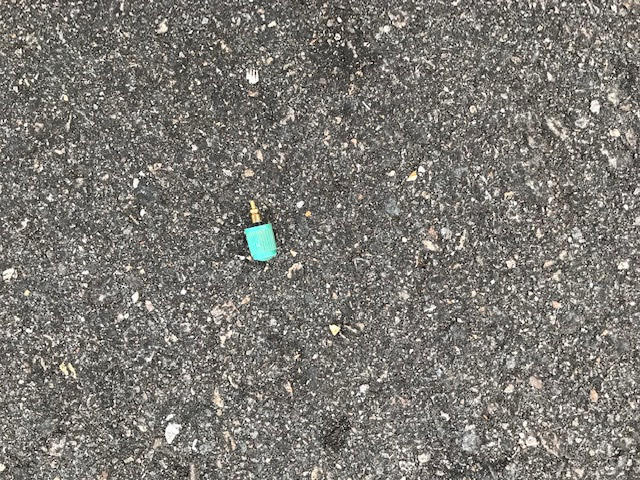 So we headed for home with the spare tire on.  We have an actual spare tire, not a donut thank goodness.  I will find somewhere to fix it tomorrow or the next day or sometime.  Went 6 months without a spare last year, right Harold???

Here was our rainy view out the window tonight. 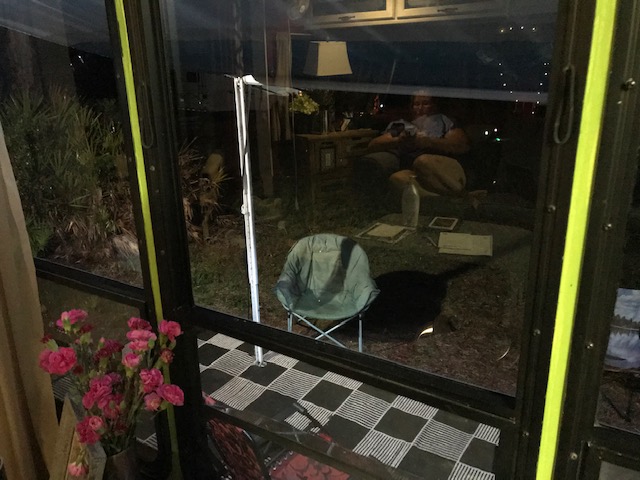 Posted by Lorne Green (A Place Called Away) at 19:18:00
Email ThisBlogThis!Share to TwitterShare to FacebookShare to Pinterest